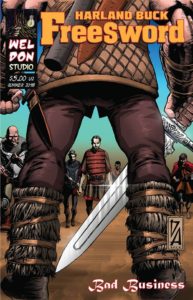 Well now, after sitting around and twiddling my thumbs off and on and allowing my copy of the 5th issue of Scott Weldon’s Harland Buck: FreeSword to just sit around and look nice like, I finally sat myself down and read this latest issue. Not only did I read it, but I came away from it feeling like I got gut punched in the feelings and having to shake my head at Harland’s way of thinking where a certain Rose is concerned. Kudos to Scott for causing that kind of reaction and I have to wonder how many others felt that way as well. Scott’s creative team (Dino Agor and Avery Ferdinand respectively) continue to do great on the art and colors so there’s no complaints from me in that regard. They capture Harland’s regret around the end so well that one probably wouldn’t even need any form of dialogue to understand the situation.

I love that we got to see more of Lilian Rose in Scott’s world here, along with a few other folks like Jerrik Ninefingers. Who definitely seems like the type you’d want to be around for good times and lots of laughter! Kyle Marsh and his Red Spear pals? Not so much. And their arrogance definitely does them no favors in this issue. After having first met Lilian in a previous issue, one could tell there was clearly more to be seen when it came to her and Harland despite the sort of work she does. Or at least I could tell at any rate since I guess some part of me is a romantic. I love what she tries to do with Harland in this issue when it came to thinking about other paths in life. Something he tries to be resistant towards and that’s a little on the sad side as well in my view. And makes me wonder what sort of tragedy of his past could have caused him to develop the attitude and mind set he has about certain things.

Us readers also get to nicely learn of the fact that there’s a sister out there in the world for ol’ Harland. One I hope we get to meet at some point and if whether or not she can wipe the floor with our man Harland! I’m sure Lilian would probably appreciate it! Again, this issue was a real gut puncher by the end where Harland and Lilian are concerned. Along with what was almost a rising bit of character progression for our lead man until his line of thinking where certain things and Lilian are concerned happens. How this will play out in the future is unclear but I look forward to what happens when it does. Will the remaining Red Spears crew come back for more revenge? Will it personally effect Lilian in a bad way since Harland clearly only will fight if there’s coin to be made. Which I have to wonder if that’ll get him killed one of these days. Hopefully not but only Scott and crew know for certain!

Heck, maybe the next issue will finally reveal a tidbit or two about ol’ Harland’s special sword! And if you haven’t read this issue or even previous ones, what are ya waitin’ for!? Go and do so!

Summary: Harland Buck doesn’t like to mix business with pleasure, which makes for a tough choice in his latest adventure.