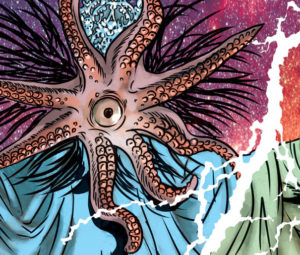 Why would a comic book creator with several graphic novels available through Caliber Comics and a body of printed work stretching back a decade launch a weekly horror strip on Webtoons? Gary Scott Beatty said it’s a raving, mad obsession.

“Once I started coming up with these Gods of Aazurn stories it’s like I’ve been possessed,” Beatty explained. “Stories of ancient, monstrous gods and their downtrodden minions have taken over my thoughts and even transformed my art style.”

Readers can access the free, weekly Gods of Aazurn comics at StrangeHorror.com.

The premise for Gods of Aazurn is simple. They are frightful and dark and divine, and their subjects despair. So far, the Gods of Aazurn do not care about Earth humans, even enough to reach down a mighty hand to be cruel. That’s about to change. 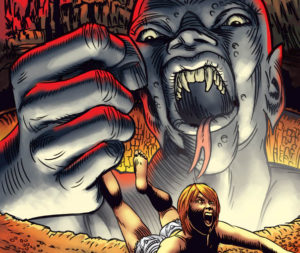 “We think we’re so dominant, despoiling our little blue planet and warring with each other over slight provocations,” said Beatty. “What if we aren’t all that special? What if, in the grand scheme of the universe, we’re powerless bystanders? What if the only reason we haven’t been forced into servitude is we haven’t yet been worth conquering?”

With ideas flowing and art style developing, Beatty decided to take the leap into a weekly strip. “I’ve always admired comic strip artists, whose staggering story output in newspapers should be regarded with wonder by anyone, but especially us indie guys who often spend a year (or two, or three) producing a single book.” 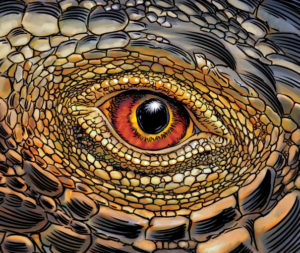 Beatty said he’s been exploring web comics formats for years and fell in love with Webtoons’ system. “I love the format. Vertical swiping between panels simply works for comic book reading. I wish every Comixology book I’d ever bought was formatted in this style.”

Beatty is a little leery of the comments section in his new weekly. “Who knows? Maybe I’ll find others who are being kept awake by visions of vicious beasts slowly turning their fanged heads in our direction.” 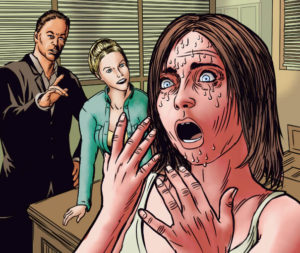