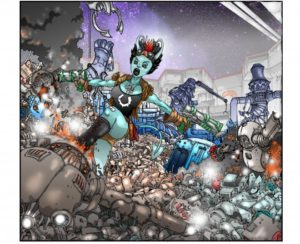 I wasn’t sure what to expect when I started to read this, but by the end of my read through of it, I found myself pretty freaking amused. Amused, along with wanting more and wishing I had read this when it was first printed through Heavy Metal Magazine. But at least now I’ve had the pleasure of reading this. Long time fans of IndieComiX will likely recognize the names of Gary T. Becks and David Paul considering the web comics of ‘Mazscara’ and ‘Joseph‘ that the two have done and we’ve ran on the website in the past. And for me, getting to read this bit of work by them was an enjoyable treat while somewhat wondering how this whole thing was born in Gary’s head. Some really good drugs that put him on a nice trip? Or just a Hell of a moment of inspiration?

Either way, Vita Von Fiendhiemmer, aka Fiendy, is one Hell of a lady who knows how to have a wild time. Albeit, she’s not the type you want to bring home to mom! Our gal Fiendy is an artist, and something of a starving artist at that. Which we see some interesting moments later where that second part’s concerned. Now its easily clear to see that Fiendy isn’t a well liked artist due to her preferred art style against the preferred method this particular universe has. Her chosen art path is also another way to show that one man’s trash is another man’s treasure. Or way to make art at any rate known as ‘Wreckage Art’. And if I’m not mistaken, quite a bit of the language seen here is of German (feel free to correct me if I’m wrong though) origin. And I’m kinda curious as to why that was used for this. 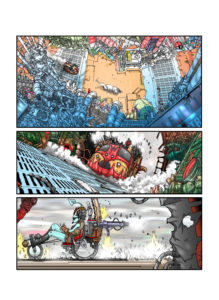 Then again it was probably just used by Gary and David to make things in this 40 page title that much more surreal as we see Fiendy go through various events. Like getting into (anticlimatic) battles against one General Stagnite of the Wacktackulus Empire. And heh, I kinda love that name to be honest as its goofy but it works so well in this creation of Gary and David’s. Which, aside from ‘Mazscara‘, goofy is something of a theme that’s seen a lot where Gary and David are concerned. At least in ‘Joseph’ for the most part! Now I definitely wouldn’t recommend this for kids unless you aren’t the type who feels they need censoring due to the adult themes that can be found in this. Fiendy and Stagnite to me kinda have the feel of a certain rascally rabbit and a certain hunter from back in the day and I love that and makes me wonder if that was intentional or just a by product. 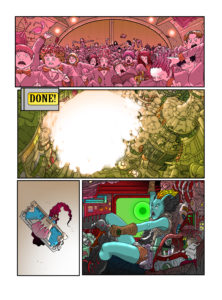 Because like with the rabbit and the hunter, these two can be entertaining to watch as they try and kill or outsmart the other. And I think Stagnite will have learned an important lesson when it comes to stealth infilration for the future! I could go on a bit more about this title, but that would end up more than likely spoiling something and I don’t want to do that. So I’m highly suggesting you guys head right here and download yourselves a FREE copy of Fiendy and enjoy the mayhem for yourself! That’s right, I said FREE! Or if you have already read it, do so again and have another laugh or two! I don’t know if Gary and David ever intend to return to Fiendy and her world (if they haven’t already) but I would definitely read more of this world if they did!

Summary: From the pages of Heavy Metal Magazine Gary T. Becks gives you an intergalactic artist like none other.