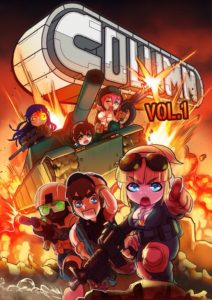 This preview of Column does exactly what it intended to do. Catch people’s attention with its dialogue and the crazy warzone situation our two main (Jack Arnold and John Hatch) fellas are unfortunately in. Though if you’re just jumping right into this without knowing everything before hand, you just might be confused about why certain things are happening. Along with who exactly is or isn’t good. Which is why a little research before hand is always a nice thing. Sadly, I read this first and then looked up anything I needed to know afterwards. Column would most likely fit right in as a cartoon on Cartoon Network due to Ben Harvey’s cartoony feel where the art and colors are concerned, though maybe more so in the Adult Swim line up due to a suggestive element or two that shows up later on. And while I enjoyed this preview for the most part as it was a nice introduction to Tim Morris, his creative team, Arnold, Hatch, and some badass US Army gals and their tank, there was one thing about it that drove me nuts.

And that was the use of mispelled words found all through out the book. I don’t know if that was intentional or not but it doesn’t exactly make me want to return (despite wanting to see what happens next) for more if the actual Column title is just as littered with mispelled words. I get that this is meant to be a little on the lighthearted side of things and I probably shouldn’t be so irked but unfortunately, I am. And if you don’t know yet, Column is basically Tim and the gang’s take on a possible World War 3 started by a bunch known as the Metas. Who have a not so nice device called a ‘Disruptor’. Which is allowing them to be a huge problem but you can never keep America down for long as eventually, the country will find a way to fight back. And the preview is just one example of us getting to see that in action. Even if Arnold and Hatch are pretty much out of their element as they try and survive the chaos the Metas are putting them through!

Now I do have to mention that Tim and the gang made a run at getting a successful funding on Kickstarter due to some of the extras they have in mind. Like audio logs and music. Unfortunately, they weren’t able to make their goal but that hasn’t stopped them from pressing forward by going on with Patreon. Of which I hope is definitely a successful venture for Tim, his creative team, and Column itself! So if you’re looking to find a lighthearted take on a possible World War 3 (or post that?) Column just might be for you!

Summary: Column is an action-comedy series of graphic novels set in the near future during World War 3. It follows the crew of the Helcat, an M1A2 Abrams main battle tank, and chronicles their adventure across the globe.