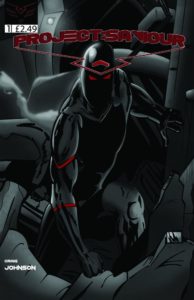 Getting to review Independent Comic Books, whether they be part of a publisher or self published, is a privilege I don’t take lightly. Frankly, I consider it an honor to be able to do this as I get to be exposed to so many books that I probably wouldn’t even know about otherwise. And Craig Johnson’s first issue of Project: Saviour is just another of those awesome titles that are out there, waiting to be seen and read by folks looking for something to sink their teeth in too. Especially if they like their comics with little to no coloring like Project: Saviour has going on. Such as lots of black and white and some red in various places. Now I will admit that this first issue is something of a mystery mixed in with an origin, making for one to possibly be wanting more (like me) or perhaps being turned off to that. Now I’m not sure if the first suited up person is our main guy or if our guy in the hoodie is the main guy as they both have two different outfits on.

Which honestly can be a little confusing given how this story opens up with a nice big ol’ explosion and one the first character we see right in the middle of it after all is said and done. Along with some inner dialogue about the burdens that’s placed on him cause of the choices he’s made. Whether or not that’s just him feeling responsible when its not necessarily something he needs to feel responsible about is another thing entirely since most heroes (especially ones with something of a troubled past) tend to place certain things on their shoulders to bare. Either way, I’m looking forward to finding out more about our troubled hero and his current issues. Ones involving a crap ton of property destruction, lost lives, and a troublesome dude named Scyther who’s got a few friends to help him out in his mayhem causing ways. It’s also apparent that the cops aren’t exactly reliable either, which is damned unfortunate and is another thing I’m curious to see how our main guy will over come that obstacle.

Hopefully it won’t involve more lost lives and property however. My advice to Craig however? Would be to make things a bit clearer about who is who without giving up too much info. As it might help avoid confusion in the future for new readers. Especially if they aren’t sure if one character is supposed to be the same as another or not.

Editor’s Note: Interested in checking this out for yourself? Then head right here!

Summary: “After a glimpse into a dark future we witness the story of how it comes to pass. The world is in crisis, over population and governments answering to the big corporation’s innocent people are paying the price.

Follow the story of one man trying to make a difference. Uncover the mystery of how he got his powers and see if he can show people hope once again.”