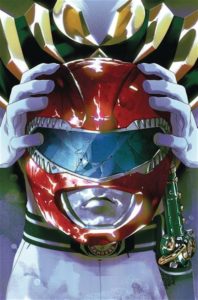 After having read through this twice, I’m… Not entirely certain this lives up to the hype that’s been done in the lead up to this issue and its beginning of the Shattered Grid event. Of course its entirely possible I had a level of expectations that I more then likely shouldn’t have had and that’s on me since at the end of the day, this is pretty much a set up issue for the events to come. Not to mention the rather shocking twist at the end I wasn’t expecting. The fact I haven’t been keeping up with the series is more then likely another issue for me as well. But just cause I wasn’t exactly pleased with this, doesn’t mean I’m disappointed entirely with this issue. As admittedly, there was some things about it that I liked. Like the fact the comic isn’t limited in budget or relying too much on stock footage and because of that, it allows writers like Kyle Higgins to do more in comic book form then what the show can. Take for example, Drakkon. I know little about him but that’s okay and in a way, its like he’s what we could have gotten if Tommy had remained evil instead of going good.

The fact he’s from an alternate universe allows for any number of possibilities to happen. Especially when it can play havoc with the not so evil Tommy’s head and its clear to see that that’s already happening somewhat in this issue. And I hope we see more of that in the issues to come as well. And I love that despite the seriousness of the whole situation, especially when there’s more going on that they aren’t aware of, like the Time Force rangers, that there can still be time for something like a date. And in my view, I think Kyle did a pretty good job in attempting to balance the serious and not so serious sides of things. Hell, the fact we get to see Tommy and Kim on a date, or at least the set up and the aftermath anyway, was a fun thing to see. Especially since I don’t even really remember seeing the two really go on that many, if any, dates in the original show. Granted, its been a good while however since I went and Netflixed the show so there’s that.

I loved seeing Ninjor in this issue and I’m curious if he’ll be back again as the event continues. As come on now, there’s no way he’s gonna leave things alone after Drakkon’s parting comments to him! Seeing Trini and Billy working together felt like old times for me and I really enjoyed that and means I’ve more then likely missed out on the two doing so in earlier issues that’s been done by BOOM! Studios so far. The start of this event leaves one with questions and I look forward to seeing how they get answered as time goes on. Such as if Drakkon is aware of what his actions are causing and if he even cares. I’m also curious to see how the rest of the Rangers will react to Jen of the Time Force team considering the ending that I legit didn’t see coming. Along with what sort of friction there might be between her and Kim as well. Friction that could just as easily cause problems for the team as well.

Summary: Drakkon returns and the Mighty Morphin Power Rangers will never be the same. The ‘SHATTERED GRID’ event begins here!