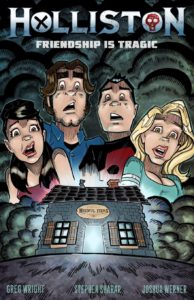 Holliston: Friendship Is Tragic is essentially a cautionary tale at the end of the day. One that makes you realize even further that you shouldn’t look an unexpected gift horse in the mouth and run wild with it. As you may never know of the potential kinds of consequences that could happen if you do! Now some might be familiar with the Holliston concept given that it was a tv show some time ago and sadly, I myself hadn’t heard of the show until Greg Wright and I got to talking a little. Although, I imagine a friend of mine is more then likely familiar with the show considering his love for GWAR. Now you don’t necessarily need to have had prior exposure to the Holliston tv show in order to read this, which is a good thing as otherwise you might be lost as this is pretty much its own little solo story. One that doesn’t really reference anything from the show itself as it goes about doing its own thing.

Now to be honest, after having read Holliston: Friendship Is Tragic, I wouldn’t mind going and looking for the tv show so I can watch it. As I’m curious if the show has its moments where things get really over the top or if its just something Gary and Josh Sobek, along with Greg decided to do for the comic since its its own self contained story. Now as for the characters, Adam and Joe, these two are wanting to do it up big for Halloween, which, you know, is understandable. Unfortunately, money, much like it can be in the real world, is something of an issue for these two. Now this where my remark about gift horses and the like comes in as Adam finds something that he thinks can solve his and Joe’s problems. And while I wouldn’t say I’m all that superstitious, finding your meal ticket under a dead cat is bad juju. Not to mention kinda disgusting as well for that matter! Its quickly clear that Joe’s got the right idea of things where Adam’s little gift horse is concerned despite Joe not wanting to listen to his friend’s warnings cause he sees the dollar signs and what not!

I’ve gotta admit that Stephen Sharar’s art kinda reminded me somewhat of Paul PJ Johnson’s and I liked that. Granted, I only really started to think that as I was getting nearer to the end of the story but that’s okay. Joshua Werner’s colors definitely go well with the art and further helps me think of Paul’s work. And I bet these two really had some fun once they got to where they could really cut loose and have some fun! Fun that Joe has to learn the very serious consequences of the hard way despite his good intentions. But as the saying goes, the road to Hell is paved with good intentions. Although, as things get going, it kinda feels like there’s a really sudden switch up in beliefs about curses and the like. I don’t know if anybody else might feel off about it but I know I did. With the over the top events within the pages of Holliston: Friendship Is Tragic, these events are kind of cliché and naturally, need something just as cliché to put an end to them. But whether or not Adam learns an important lesson at the end of all this, is another thing entirely.

I’m curious if there’s gonna be more of Holliston in comic book form in the future. Or if this is just gonna be a one time thing only since Adam Green mentioned in his foreword that he’s looking to bring more of the show to fans as soon as he’s able too. Either way, I’m looking forward to seeing what happens and perhaps I’ll feel the next offering will be a little more for me unlike Friendship Is Tragic.

Editor’s Note: Wanna know where you can find your very own copy of Holliston: Friendship Is Tragic? Head right here!

Summary: The characters from the TV series appear in this stand-alone adventure, brought to comics for the very first time. Adam, Joe, Corri, and Laura are about to discover just what their friendship can handle when Adam finds a cursed credit card and buys his friends some Halloween gifts. The presents are perfect … a little too perfect.

Soon, mad killers, giant monsters, and evil aliens are on the loose, as well as the deadliest threat of all: success! Will the gang sell out? Will they ever speak to each other again? What’s the return policy for cursed credit card purchases? Find out in Holliston: Friendship Is Tragic!