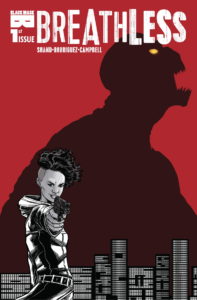 I’ve been very curious and eager to read the first issue of Breathless ever since Pat Shand reached out to folks on Twitter about doing a little PR work by those like myself who run websites regarding it. And I have to say I think the wait to fulfill my curiousity and eagerness was worth it. Now does this go the route of most first issues by setting up the events to come? Why yes, yes it does and I have no problem with that since otherwise, we’d have to learn as we go via flashbacks if the story had begun straight into the action. I love that there’s demons in this and I love that Pat Shand and Renzo Rodriguez are more or less taking potshots at Big Pharma without going overboard with it. Part of me is curious though as to how much Scout’s inhaler cost considering the reaction the girl behind the counter at the pharmacy had to the price. Another thing I’m already loving about Breathless is how well done the writing is when it comes to the characters and their interactions. As Pat’s writing makes you really feel that these characters have been around one another a good long while.

I know I couldn’t help but laugh over an insult of sorts that Scout has for one Grace-Eisley. Who obviously seems like a sweetheart that anybody would like despite her habit of near constant chatter. Unfortunately though, that little habit of her’s is definitely going to be a life or death kind of problem and I won’t reveal why as that would spoil things for those of you who haven’t read this just yet. Breathless also helps to remind people that discoveries through Science, no matter if intended or not, can sometimes help lead to the next big thing that might help people out. Or, you know, fill someone’s pockets with more money while also possibly helping people out. Like those who have to rely on inhalers for example in order to make it through the day without any serious problems happening. And as I mentioned previously, new things are discovered through Science and experimentation, and that’s a little something that’s made use of for Breathless. Though at the same time, it easily could have meant certain death for Scout. So that girl is definitely a lucky one where a Hisser’s venom (one of our lovely demons for this world) is concerned.

Though I am curious if there will be any other side effects for Scout that hasn’t been revealed yet. Or if its just that one particular thing that has changed for her. One that will mean not having to spend money on inhalers and potentially getting a defective product. Whether or not she gets to enjoy that for years to come remains to be seen however as things get deadly serious by the end of this first issue. And no doubt will serve as a very important lesson for Grace-Eisley on what not to talk about on social media or even out in public. Big Pharma and the various demons that exist in the world of Breathless aren’t happy and if Venom or Carnage was to see the Drinker demon at the end of this issue, they’d more then likely be jealous as Hell! Hell, I may never think of the sipping sound in the same way ever again thanks to Breathless as well! The Drinker we meet at the end of this issue makes me wonder if he, she, or whatever is a homage of sorts that Pat and Renzo chose to do where Venom and or Carnage is concerned.

And I have to say, Mara Jayne Carpenter’s coloring duties wonderfully brings Renzo’s art, especially the vomit inducing carnage we later see, to life wonderfully well. Hopefully she and Jim Campbell will be with Pat and Renzo for the entirety of this series as well. The journey’s barely begun for Scout and Grace-Eisley and I can’t wait to see what all happens as they deal with Big Pharma and other threats as they fight to stay alive. And possibly, make life just a bit bitter for those who need an inhaler.

Editor’s Note: Breathless #1 is now out in your local comic shops! Get it today!

Summary: It’s Buffy the Vampire Slayer if the villains were big pharma. Scout Turner works as a cryptozoologist, examining and cataloguing supernatural creatures for scientific purposes. When she discovers the cure for asthma in the venom of a new breed of monster, she quickly finds herself on the run from Kenilworth Pharmaceuticals and the monsters that they’ve hired to kill her. With no one by her side but her clueless assistant, a morally ambiguous succubus, and her geriatric dog, Scout goes on the run… but in a world controlled by money and drugs, can she escape the reaching claws of a medical monopoly?