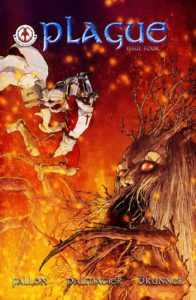 Plague continues to peddle on as our wayward heroes continue their journey to freedom. Last issue ended with the promise of a continued epic showdown between Tegg and the trolls, this issue opens and that fight comes to a close quite quickly. Within the first few pages in fact. However, I never found myself lamenting that decision as it’s been a decent chunk of time since I read the last issue. Reading this story in trade however, some people may find the abrupt ending to be disappointing.

I’ve constantly been impressed with the writers’ abilities to cram so much into these single issues it often feels like you’re reading two comics for the price of one. This is often a great feeling and not so much as it also means some story lines exist merely to fill space and are rushed. Like in some of the early pages of this issue when Friar Robb comes face-to-face with plague doctors after sneaking into their camp and masquerading as one. He’s quickly found out, but is not punished or really questioned in any meaningful way. It’s possible these pages are set-up for an emotional arc for Robb, but in the context of this world I found the rushed and unrealistic pace of the scenario to be a bit much.

Where I do think this issue really shines is in the back half when we focus on Moray and his crusaders and then what comes after. Moray is an interesting character, and I love seeing him go up against spirits. This issue we’re introduced to the Roggenmutter, which thanks to the handy guides in the back of the book is a grain spirit that lives in Rye and is said to cause hallucinations and disease. This creature looks really, really cool and I absolutely loved the pages where Moray takes on her and her children. It was a really well drawn fight and this is definitely one of my favorite designs of the series so far.

After that our heroes finally catch up with Moray after taking the detour into troll land, their group having grown by one troll. We’re also introduced to another new creature in the way of the Hodekin, a goblinfolk creature that remind me of Dobby but I swear I read him in Gollum’s voice. It’s a strange combination but he’s a fun addition to the team. The book ends with the promise of a showdown between our heroes and Moray. Hopefully this one will last a bit longer? 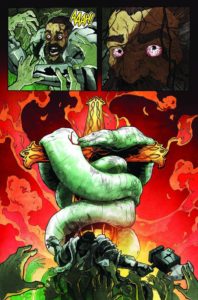 I really enjoy this series. It’s a great journey through many of the creatures that have often been portrayed in European Folklore, fantasies that are near and dear to my heart. It’s been fun, exciting, and continues to impress me even when I feel there’s something wrong with it. The art is always great, the characters are all endearing to some degree, and even the villain is interesting. This series is obviously not perfect, but depending on how it sticks its landing it might just be something I return to in the future.

You can buy Issue #4 at the link provided: Plague #4

P.S.: Man, the Roggenmutter design is too cool!

Summary: Our heroes are pursued through the English Channel after Moray calls on the power of the Ark of the Covenant to spread pestilence across England. Meanwhile, in the cold North Sea, ancient magic awakens the legendary Kraken, forcing the selkies of Iceland to come to Robb’s aid. But it’s “out of the frying pan and into the fire” when old feuds reawaken between Tegg, a Scottish spirit warrior, and the trolls of Norway – it’s a fight to the death in the Nordic underworld!