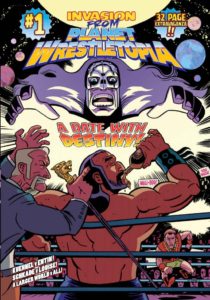 I love Wrestling, especially good wrestling. And if its got some kookiness to it at times, even better. And Ed Kuehnel and Matt Entin certainly capture that quite well while nicely managing to keep things serious as well in this comic of theirs that’s the latest to add its own touch to the Wrestling Comics genre. Rory Landell, the Rock and Rollin’ guy of the Universe, is this fair story’s main star! Albeit, he’s a bit driven and seems to have something of an ego that is clearly getting in the way. Of course, I’d be feeling a little unhappy too if my dreams were about to be achieved of winning the belt, only to see that taken away for whatever reason. Whether something like this is something that the creative team themselves have experienced or simply heard through stories from others, that feeling of disappointment is easily felt. Along with making bad choices while feeling angry. Of course I’m darned curious as to how those bad choices are gonna effect Rory where the Cosmos are concerned.

I love that Rory has Don on his side, even if he does tend to ignore a lot of the older man’s advice. Though I suspect that he’ll be wishing he had done so soon enough once issue 2 and beyond starts a happenin’! Marissa Louise does a great job on the coloring and with Dan Schkada’s art, I honestly wouldn’t mind seeing the two do a cartoon together as it would look pretty sweet in my view. Now I could go on about this first issue but that would more then likely spoil things for folks who haven’t read this and that’s the last thing I want to do. I am curious though, will some rather offended off worlders have whatever they are planning televised to Earth? Or would something like that get shown to them years too late? Either way, I can’t wait to find out and what a certain girl is liable to do if she ever see’s Rory again. Probably layeth the smackdown on him in front of millions! This may be a comic involving Wrestling but don’t let that stop ya from hesitating to check this title out and supporting the Indies while doing so!

Editor’s Note: Head here to make your choice in acquiring a copy of this tale of smackdown! 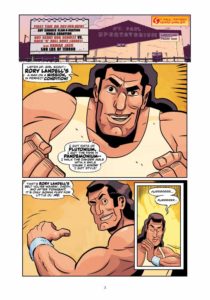 Summary: When a disgruntled professional wrestler declares himself “galactic champion of the universe” an alien planet of wrestlers sees it as an act of war!

A whopping THIRTY-TWO page megaextravaganza of a comic book kicks off this series with art by Dan Schkade, colors by Marissa Louise and lettering by A Larger World Studios. Designed by Fred Chao. Created & Written by award-winning writers Matt Entin & Ed Kuehnel.