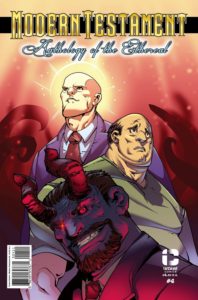 Well folks, its the end of the line, the mortal coil has begun to shuffle along to the next life, leaving behind all who knew and loved it. In this case, said mortal coil being Frank Martin’s Modern Testament series as this 4th volume is the final one. And hot damn did he save the best for last! God himself, the Devil, Cain (though one could probably argue just how important he is), and Death himself! These four being perhaps the 4 most important figures in the universe. One having created it, the other essentially being the first evil, the third being the first killer in existance, and the one who’s responsible for sending along souls to their next destination. Though I imagine there could be some argument as to whether or not the Devil is the first evil in all of existence or if perhaps Cain’s actually the first evil considering he was the first to kill someone while ol’ Lucifer just manipulated Eve into eating that Apple of Knowledge. And said someone being Cain’s own brother, Abel.

Its definitely understandable to see why Frank chose to save God, Satan, and Death for the final book, even without his explaining why at the end of the book. Cause opening with those three mega stars in the first book would perhaps have been a hard task to follow up on! I have to say though, San Espina may want to be more careful in the future when drawing a character in a suit as at times it kinda looked like Satan had no neck while in his suit and taking care of business like a ruthless businessman who tells it like it is while smoothly buying you out in his ‘Better The Devil You Know…’ and ‘…Than The One You Don’t’ appearances. The fact Satan’s a short fella in this doesn’t even bother me as I’ve always viewed him and even God as the type who could inhabit or appear as whoever they wanted. Which always makes for a fun time whnever you see either of those two or even an Angel in some form of media. Ray Wise in Reaper as the Devil has certainly been a memorable occasion for me as he was great in the role!

And I have to say, the guy he makes a deal with? It couldn’t have happened to a better person as this oh so ‘loving’ husband and father was a definite piece of trash in my view. Though his wife clearly has issues and Lucifer drags that skeleton out of the closet real nicely too when he shows up in his second appearance in this 4th volume. Here’s to hoping the daughter is a lot smarter then the mom and dad combined if she’s not in a mental institution following what happens to her dad! And while ol’ Luci may not care too much what Humanity in general thinks of him, its definitely easy and relatable to see why he’d be tired as Hell of everybody blaming him for things he more then likely DIDN’T have a hand in. His story in Modern Testament has a good lesson to be learned in it. That you should take responsibility for your own actions instead of always blaming someone one else. Cause if you continue to do that, you’ll never learn and grow as a person and be doomed to repeating your mistakes. And bringing down others with you in the process.

Its a Hell of a way to learn the lesson, but who better then the Devil himself to teach it to you? Even if the cost is your own soul. And I’m not gonna lie, when we meet God in ‘The God Complex’, I thought the way he was handled was a little too much. But then, after a second read through tonight, I realized the Creator Himself more then likely would do like he was shown doing here. Sure, knowing all that the universe has to offer is a nice idea and all, but there are some things that just shouldn’t be uncovered. Heck, uncovering everything would be boring in the end and would no doubt put Scientists out of business! Martin Szymanski does a terrific job with the art in this story as we see God go to town on those who came to see a certain Professor’s presentation of ‘The Theory of Everything’. Even if some of what happens is a little shocking. But hey, God has to make a point, no matter how bad it might be that some things are better left unknown! And a certain Professor truly and thankfully learns that, even at the cost of being disgraced in the Science Community. Said Professor kind of even made a point to God about his own choices too but I kinda wonder if he was being played at without even realizing it where that’s concerned.

Something I imagine we may never know the truth on where this story is concerned! Well, unless Frank chooses to comment that is!

Even Death likes to channel surf!

‘At Death’s Door’ is an interesting take on things where Death himself is concerned. And I’m curious as to what led to Frank running with the idea we see here of Death and his less than stellar appearance in a house in bad need of a clean up! And rather then being tired of his eternal post of reaping souls cause its gotten to be a bit much for him, he’s just tired cause its the same old same old. Which is definitely an interesting take on the Grim Reaper for sure! His brothers have managed to find ways to spice things up and yet he hasn’t quite been able to do so. Which… I can see why that would be rather irksome to a guy like him! Not to mention irksome to those up and downstairs. It also makes me curious as to how souls are passing over if he’s not doing the deed himself. Is it an automatic thing? Substitutes in his place? Or is Death just not in motion anymore thanks to Death himself taking a long, long break from it all? Its comics like these that get you questioning things that makes for great moments like this and I just love it.

Cain showing up like he does in this final story is an interesting take in order to get some motivation going. As after all, who better then the first killer to re-kindle Death’s motivation? Even if the guy is possibly an opportunistic jerk! Guess cursed to walk the Earth really hadn’t done him any favors! And while Anthony Pugh’s art and Julian Dominguez’s colors feel kinda cartoony like in this final Modern Testament story, it doesn’t really take anything away from the story itself. Sure, things probably coulda been all grim like but it goes to show that it doesn’t always have to be like this. Even when telling a story about Death himself! I have to wonder if Death might face consequences for an action of his regarding Cain. Who… Well, honestly deserved it and I won’t spoil the whats and whys if you haven’t read the final Modern Testament volume just yet. Although… A bit of dialogue from Cain now has me wondering what if God had turned him into Death as punishment for killing his own brother? 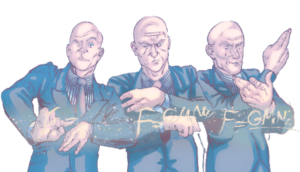 The original G himself!

It’d be a cruel twist for certain until the end of time for him. But does Death get his groove and motivation back thanks to Cain? Even if he was being something of a jerk? Its unclear given what he’s doing at the end of the story and I have to wonder if he does go back to being a couch potato, what the higher and lower ups might think of that. And then decide to do. Especially if its affecting the Mortal realm in a less then pleasant way. Frank Martin has crafted a wonderful series of stories using characters who have been a part of Humanity in one way or another for eons. Giving readers like myself things to think over and even question. I’m thankful for having been given the opportunity to read Modern Testament and while I’m not sure what he has in store for folks next, I know I’ll be willing to check it out when the time comes! Frank shows that while beings like Death, War, God, and the Devil himself are worlds above us (below us too for that matter), they too can be a bit like us when it comes to certain things as they try and find their place in today’s modern society.

Modern Testament is not the story you want to miss out on. As you rob yourself of the chance to read an amazing series and why would ya want to do that!?

Editor’s Note: Head right here to grab up this edition of Modern Testament, along with previous volumes if you haven’t done so!

Summary: Biblical beings, although ancient and iconic, struggle to be understood and find their place in today’s society. Humanity has changed since their creation during the days of antiquity, and they along with it. These tales chronicle them on their journey of self-worth and purpose. They’re stories of discovery we’re currently writing everyday in our very own Modern Testament.