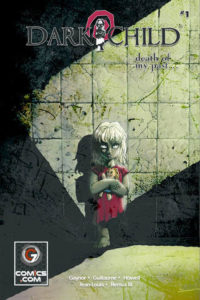 I was on a comics website which I peruse from time to time to see If I’ve missed any indie or self-published books. As luck would have it I found this one and reached out to G7 and asked if they’d work with me so I could review this title. I’m pretty proud of my instincts because what I saw if it was more than enough to make me want to see more. I love horror genre stories and that means anything from psychological to slasher anything that encompasses the realm. I will wholeheartedly admit I have a soft spot for myths & legends that are dark and powerful and I wasn’t expecting to find that here but gotta say I’m more than wowed.

The whole issue is really an opening to the series. Duh, you might be thinking but I literally mean the entire issue not the beginning, not mixed in, but the entire is dedicated to introducing you to this Dark Child. After reading this I’m not sure there really was a better way to go about this. I like the way the narration is used through the eyes of a character that we see unfolding in the panels. I think even more interesting is the setting for the opening as it’s Seguin, Haiti and it’s no secret that a lot of Haitian folk practice the religion of Voodoo and speak Creole it’s kind of a stereotype at this point for using a Haitian character but to see the island where this all begins feels authentic.

At first I thought maybe the interiors were a little amateurish but I got over that real fast because it has a cartoon feel that I wasn’t expecting. That and I can’t tell if the pages have photographs where the panels are placed on them or if that’s just digitally done but regardless it’s impactful. The multi-media feel it brings makes this stick out and you really can’t help feel like its innovative. So I became more and more impressed with each page that I saw. The use of the page layouts with their angles, perspective, use of shading in the night as well as the utilisation of backgrounds is really quite strong. The face of this young man we follow and that of the young girl have nice detail in them. Then there’s the whole creativity and imagination on display that I’m enjoying immensely. 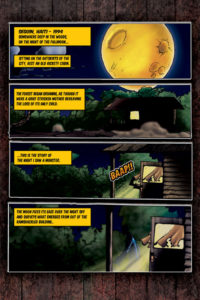 I like that through this issue the guys are able to demonstrate how commonplace creatures of the night who like to inhabit the dark are. As he walks to get water because there is none in the cabin and the precautions he takes it just seems like a part of who he is and that its expressed without having to go into lengthy reasoning speaks volumes about the research done in making this. Plus the way the story is structured here is quite impressive. There is an expressive ebb and flow to the way things unfold here that almost belie the complexity of the story itself.

This isn’t meant to make you jump in your seat instead it feels like its meant to pull you into a world where monsters are real and they are something to be very very afraid of. From its voodoo roots to it’s mainstream storytelling this is an evolution of the old fashioned monster stories of the past. It pulls on knowledge many would consider long forgotten or lost to the ages and brings it back to the limelight without it feeling like it’s somehow a token, see stereotypical, representation. It feels like an honest and respectful look at their culture and beliefs and in this day and age that’s something remarkable indeed. 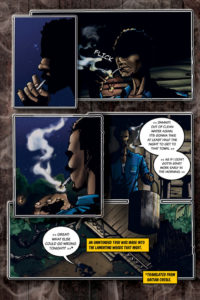 A Lougarou is what he calls the Dark Child and it may or may not be familiar to you but its a mythical creature, or cryptid, which varies from legend to legend on what it actually is. So now we’ve determined what the Dark Child is we still have a ways to go explaining how she exists and what if any her appetites may be. For that we’ll travel to a new land where it’ll be much harder to stay hidden and the myths surrounding her kind are dismissed as flights of fancy.

I’m looking forward to this one as it has such promise and potential in exploring that which makes it unique.

Summary: Deep within the Seguin forest of Haiti, a stranger’s abrupt trek through the woods takes an unexpected turn, when he encounters a dark child in a red dress. Daughter of a powerful mambo (voodoo priestess) and the great grand descendant of the Haitian Revolutionist Zamba Boukman…