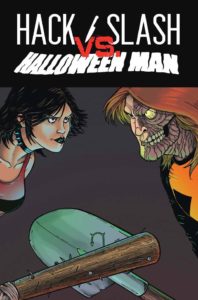 Neither Hack/Slash nor Halloween Man are properties I’m familiar with. Out of the two, however, Hack/Slash is the one I’ve wanted to check out the most so I figured this might be a good one to start with with it being a holiday one-shot and all.

Jumping right in this isn’t exactly the best starting point for newcomers, it’s definitely built with the idea that you’re at least somewhat familiar with these characters so that you can have maximum fun without little in the way of explanations. This both can be a blessing and a curse as often times expository dialogue is difficult to handle in the heat of the moment in any comic and still feel natural to the scene. For some of the characters, definitely with the Revengers, we get a lot of that clunky exposition and so it hurts the scene.

The curse is that now I’m choosing to pick this up off the shelves and my enjoyment it hurt a bit because I feel like I have to do some research in order to know who is who. I did not do that research, I just let the story take me. On my personal enjoyment with this lack of context all around I thought the first half of the story was weaker than the second half but overall I did find myself having fun.

This book isn’t for the thinking type, it’s literally a hack/slash team-up between supernatural brawlers in order to take down a supervillainous zombie parody team of the Avengers and after them a Lovecraftian God. It’s fun, the dialogue is corny as hell, the action is over the top and theirs references to pop culture everywhere. So you really need to be in a certain mindset if you’re going to enjoy this.

I did not find myself in that mindset at first so it really took me until the end of chapter 1 for me to really get what the creative team was going for here. After that I enjoyed all the above things I’ve already listed. I enjoyed the action quite a bit, I felt the Lovecraftian stuff was far more interesting than the Avengers parody. 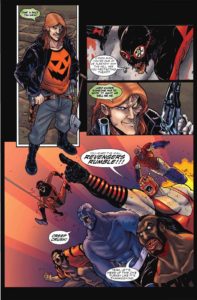 Art on this book is really nice. Very cartoonish and fits the playful aesthetic of the book perfectly. I really enjoyed everyone’s designs. I like that Halloween Man has a Two-Face motif going on. This book definitely made me want to get to know more about him. Baldeón’s action is really energetic and when he has a character throw a punch it feels like they’re actually moving rather than posing for a shot. I enjoy how he brings everything to life so that this world feels fully realized as well. It’s small, but there’s a moment where we see a robot walking a normal dog in this futuristic city and I just gushed at that detail. It really brought what this world s supposed to be to life for me. 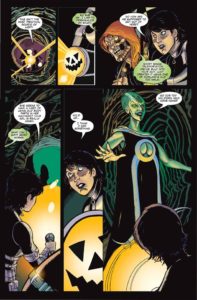 Overall, I do recommend this book if you’re familiar with these characters at all. Especially the Hack/Slash crew. But if you’re new to either of these franchises then be wary. And also if you’re the thinking type like me just be prepared to have to shut your brain off in order to have some good ole fashion fun for 45 pages.

Final Score: 4 Robots Walking Their Dogs out of 5