Some creators may have it easier then others when it comes to creating comics in the Indy Comics world, and some may not. Some could say its a luck of the draw and Dan Nokes might agree with that. Or he might send his not so friendly Chicken Of Doom after you! But with years of experience and more then one occasion of funding issues, Dan may just have some important lessons to pass along to you as his brain gets picked in this all new Mind Meld! 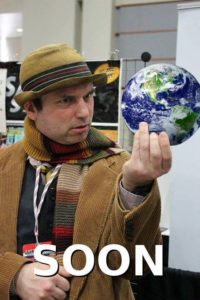 Its Dan! Not Lt. Dan though!

1. Hi there, and welcome to the Mind Meld! For those who may not be familiar with you, your work, or your often amusing FB rants, could you tell us a bit about yourself?

Sure! I’m a 15 year veteran of the Indie and Self Publishing comics scene. I’m an artist, writer, publisher, and show organizer. My book credits include: THE PARANORMALS, THE PISTOLEERS, ADAM AND EVE: BIZARRE LOVE TRIANGLE IN THE ZOMBIE APOCALYPSE, IMPOSSIBLE SPACE TALES OF THE LAST PIT STOP for 21st Century Sandshark Studios. As well as work for hire credits for The Teddy Bear Tales, FUBAR, Fuzzbuquet, and others.

2. 15 years is an incredible amount of time! Did you ever think you’d have so many years and credits to your name by this point in time when you first started out?

I’d actually thought I would have more. So much of my self published and small press stuff depends on the availability of money and my ability to get my hands on funding. But it still leaves me stunned that I managed to produce and put out that much material on my own.

3. How often would you say funding is an issue?

What time is it??? In all seriousness. Daily. Its a very hunter/gatherer type existence for me when it comes to maintaining the business end of things. HUSTLE is an every day mantra. Especially since this is my full time work. 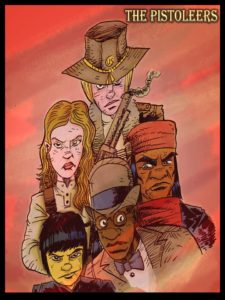 4. Do you regret the decision for what you do being your only source of income?

Not really regret…Its a trade off. I get to have a pride and love for the fruit of my labors that you do not get from a day job. The loss is security and safety of a regular paycheck. Its a farmer/contract craftsman existence in that aspect. The big difference is there is not a NEED for comics like their is toilets and food. But every once in a while I can upsize my value meal at Mickey D’s. So I savor my victories when I can get them. 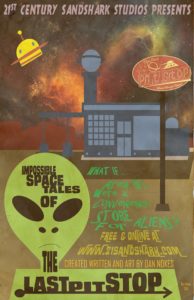 5. Now that’s one Hell of a way to look at things from your perspective. And I’m sure others could probably learn from it. What could you tell us about some of your works?

Well at the moment I am about of the third of the way done on the final issue of IMPOSSIBLE SPACE TALES OF THE LAST PIT STOP. The story is mainly: WHAT IF AREA 51 WERE IN FACT… A CONVENIENCE STORE FOR ALIENS. The previous 11 issues are online and free to read. I am looking forward to wrapping the series up and launching a Kickstarter for a TPB by end of year.

6. 11 issues? Now that’s pretty impressive doing for someone with low funding. When did IMPOSSIBLE SPACE TALES OF THE LAST PIT STOP first hit the scene? And what’s the reaction been like from readers?

It started back in December of 2012. I had wrapped up my previous series: ADAM AND EVE: BIZARRE LOVE TRIANGLE IN THE ZOMBIE APOCALYPSE. The reaction from Space Tales is much like my other books. Tough to get people to commit to reading it. But when they do, its overwhelmingly positive. 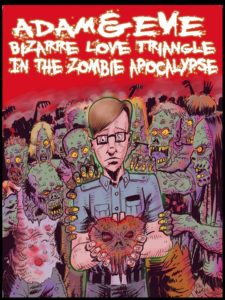 7. Why so tough? Cause its not Marvel or DC?

That is a major part of it. Its a herculean task at times to get the comic reading public to try new things. My frustration is often compounded on the fact that Space Tales is FREE to read. I have to convince an audience to read a FREE webcomic. Name brand recognizability goes a long way.

8. You’ve also got a convention in the works in your area. One that would be happening for a second time for that matter. What can you tell us about it?

Yeah! Popcomiganza is its name! Its me trying to run a VERY small one day comic and fan show. I have no problem with the massive multi day spectaculars. But they are expensive and people often don’t get to do everything in one day. This is my attempt to make something local and affordable. A place where fans can interact with local creators and everyone has a chance to engage with the fandom. 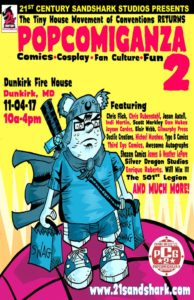 9. You would think it being free, there would be more interest. Especially by those who claim they want something different! Your idea with Popcomiganza is an amazing one in my view and I can see how it would appeal to some con goers for sure. How’d you come up with a rather unique name like ‘Popcomiganza’?

It was just an effort to not have an event that didn’t sound like every other one. Where you take a geographic location or pop culture theme and add con or comic conventions to it. I wanted something that sounded and felt like the word Lolopolooza but wasn’t a straight parody of it. 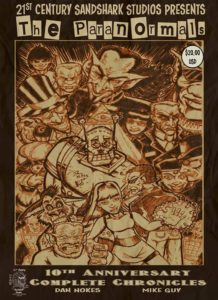 10. Sounds pretty great! How well would you say the first show did?

It did pretty good for itself. I was terrified that I would not get a single person through the door and my vendors would be left staring at each other all day. But both attendees and vendors seemed pretty happy about the turnout.

11. What all can returnees and potential newcomers expect for this year’s event?

We are doing another Cosplay Contest plus a silent auction and trivia contest table at the show. We also have the 501st Legion Old Lin e Garrison and Charm City Ghostbusters with Ecto 1.

12. Now that sounds like some pretty great fun for sure! Anything special you’re hoping to achieve with this second year show? Or just looking to ensure its a good one?

At this point its mostly securing the beach head and making what we have shine. Like I said, there are plenty of great large shows out there. I am not really looking for expansion until I’m forced to the wall on it.

13. How long do you think it might be before that ends up happening with the expansion?

Probably a couple of years down the road.

14. How long do you hope to keep doing Popcomiganza?

15. And as an Indie Creator of many years, what’s your stance when it comes to Print Vs. Digital?

On print verses digital as a creator I have no real stance. Whatever gets me the greatest audience and biggest return. 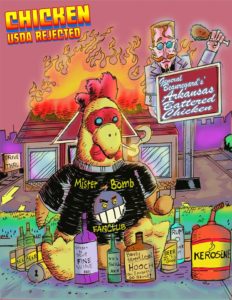 The Chicken Of Doom!

16. Would you ever consider taking the offer from a publisher to distribute your works through them in order to reach more fans?

Most likely yes. I like money and I adore money for less work than I am doing now, especially when it comes to doing less work on the business side to concentrate on being a creator. I would like to see the fine print though and make sure I didn’t sell my soul to the publishing devil and lost my creative babies in the process.

17. If you had the choice, what publisher would it be, and why?

Image for sure. They seem to have the best track record for hands off on creative direction editorial wise.

18. For those wanting to know, when does Popcomiganza start?

19. Sounds excellent! Now as for my final question, what advice would you give to those who are looking to get into comics making or are just starting? And for those looking to put together a con show?

For creators… simple! If you can imagine doing any other profession that will give you a sense of professional and personal satisfaction while drawing a steady paycheck. DO THAT! Otherwise…Welcome to the wide world of comics! As to staging a convention. DO YOUR HOMEWORK! DO YOUR RESEARCH! LEARN FROM OTHERS! GET A PLAN TOGETHER! Don’t jump into such an endeavor blind. and you get what you put into it in the end. 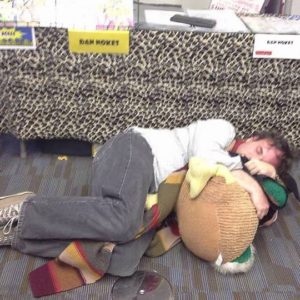 The aftermath of a great and terrible battle between Man and Chicken!

Excellent! Many thanks for taking part in this and I wish you all the best! And for all things 21st Century Sandshark Studios and Popcomiganza, head on over to the Facebook page to stay up to date! Or don’t, and get an unfriendly Chicken after ya!

This interview by: Rob Wrecks