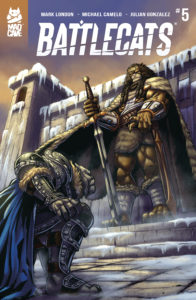 Well now, its that time again for another trip to the realm of the Battlecats! This issue also had me going back and reading the first issue to refresh my memory on Eramad II. As this particular issue left me quite curious as to why Eramad III wanted a certain Beasty dead and how it relates to the Eramad before him. What lies is it that makes Darkats/Umbra Raiders so ready to try and take on Eramad III and his kingdom? As the saying that history is written by the victor comes to mind for me in this issue and we’ve only seen one side of things in this universe. So to know what the viewpoint is from the Darkats/Umbra Raiders has me curious. How a certain Beast ended up how he did is another thing I’m curious about as something had to have caused his appearance to look like that. Cause there’s no way he coulda made himself look so monstrous. The fact Eramad III is so adamant about its death has me suspicious, not to mention how certain advisors are acting too as difficult decisions are forced to be made. Decisions Kelthan himself may have a hard time coming back from for that matter.

So much curiousity and wonderings and so few answers! Kudos to Mark London for causing that to happen in a reader like myself and I can’t wait to see what he has in store next for readers like you and me. The transition from Andy King to Michael Camelo on art duties is (to me at least) flawlessly done and were it not for looking at the credits, I woulda thought I was continuing to see Andy’s art in the pages of issue 5 and Julian Gonzalez adding some beautiful colors to it. Heck, the first of the Darkats we see in this issue shows a menacing but awesomely bad ass cat! One I definitely would not want to come across in a dimly lit alley! Secrets, attacks, arrests, and looming wars all abound the more this series goes on and I am getting all kinds of excited over it! Who is truly in the right (Battlecats crew for sure!) and who isn’t? Will our Battlecrew end up going their own way after the events of this issue thanks to the King’s decision regarding them? Or will they fight on the right side, who or whatever that may be? Only time will tell and hopefully that time won’t take a long while!

Editor’s Note: Ready to brave the pages of the 5th issue of Battlecats? Then head right here!

Summary: The Battlecats are faced with a difficult decision, one that directly contradicts the orders of King Eramad III. Meanwhile, the seeds for an evil uprising in Valderia have been planted. What does fate have in store for Valderia? What will become of our heroes?