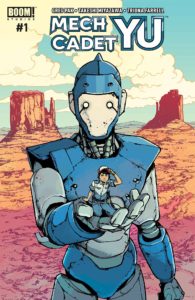 When BOOM! Studios recently ran some news about their upcoming Volume 1 for Mech Cadet Yu in January, something clicked in me that it was finally time to check out this project from BOOM!, Grek Pak, and Takeshi Miyazawa. And I am so glad I finally did so as anything positive I’ve heard about this title has been all too true! From the story, to the art, to the colors, and the letters, its all great and I didn’t want to stop reading til I was finished. Heck, I even loudly (kinda) proclaimed I wanted more! Sadly, (much to my dismay) there is no issue 4. Yet! But I know I’ll be eagerly awaiting it and perhaps praying to the Comic Gods for a quick release!

There’s just something about giant robots and the classic underdog that sparkly Vampires and Zombies just can’t compete with and Mech Cadet Yu certainly holds true to that! Now I’m not sure if Skip Tanaka is Native American (and he seems to be) but I like that he is if that’s the case. Though feel free to correct me if I’m wrong. And that he’s basically the start of the Sky Corps. 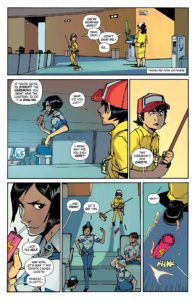 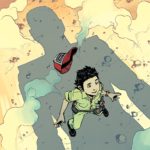 Something that young Standford Yu is apart of in one way and then unexpectedly another the next. Though sadly, he doesn’t seem to get much respect and his mom seems settled with life in a way that’s a little disappointing in my view. Both are janitors, (much respect to fellow janitors!) and that’s a nice thing to see. Especially for an origin like Standford’s as not many future heroes come from a background like that! His rival he ends up getting isn’t exactly the standard one you normally get. As instead, its a girl. Which I like cause its different and has the potential to make for some interesting situations that lead to at least friendship.

So long as she gets past her attitude and wrongful suspicions of Yu anyway. Her father anyway… Is not someone I care for as he’s obviously the root cause of her ways. Providing her her own personal Man-Made Mech doesn’t help that any either. And it sure seems like that Mech may or may not have issues! 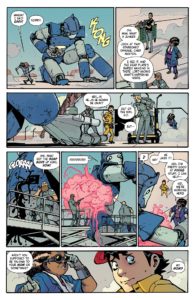 Which goes to show yet again that Man just shouldn’t be trying certain things on their own (or at all) since the Mechs from outer space are obviously sentient for a reason. I like that despite the new status in life that Standford has, along with the fact he’s not letting Miss Park’s antics get to him, (or her father’s apparent tactic causing issues through his words) that he’s still willing to get down and dirty with the maintenance aspect of his former position. I wonder how often he’ll be involved in that kinda thing now that it looks like things are getting heated up as teased in the third issue?

Though having someone on the team when on away missions who can repair their Mechs would be damned handy for sure however! Whatever happens next is something I am eagerly waiting for and if I were a betting man, I’d bet on Greg and Takeshi making it a little on the wild side! 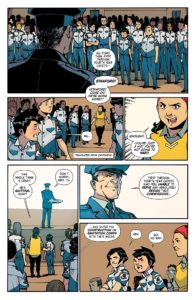 Summary: Once a year, giant robots from outer space come to Earth and bond with young cadets from the elite Sky Corps Academy to defend the world from the terrifying aliens known as the Sharg. It’s a great honor to be chosen, but this year…well, the wrong kid was picked. Greg Pak (Totally Awesome Hulk) and Takeshi Miyazawa (Ms. Marvel) team up for an action-packed adventure perfect for fans of Amadeus Cho and Pacific Rim!