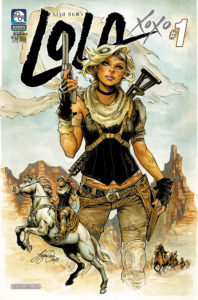 Lola XOXO begins unimpressively. Siya Oum’s colorful, steampunk-y artwork is very pleasant, and part of why I picked up the issue, but the story begins a bit ho-humly. Our heroine, Lola, and a crew of men who have escaped their captors (see the previous volume of the Lola series) are trying to make their way to Artemis, a providence of New Texas in what is a modern day wasteland to escape the bounty on their heads. Meanwhile, a mysterious, masked man pays a mercenary to off a child, who is also headed for Artemis, for reasons unknown. The payoff and revelation bangs in on the last few pages, just as the story seems to be building to a rather ho-hum first issue finale, and Oum ramps it up and gives us a twisty surprise. I can honestly say that those last pages are responsible for me looking forward to the next issue.

While you won’t find any new ground being broken here (if we’re not leaning over the precipice of peak post-apocalyptic saturation then I’m not sure we’ll ever be) there’s still a good time to be had. It would probably be ideal to read the first volume of the title before jumping into this one but, fortunately, Oum successfully manages to tell her new tale without making it necessary (though helped along with a few old-school editor type notes). From here, let’s hope Oum keeps up the momentum and takes Lola XOXO further outside the typical.

Summary: In the epic first volume, the tough-minded Lola learned the brutal reality of the apocalypse within the confines of the ruthless Wasteland Trading Company led by the treacherous Edgar and his posse! However, the true challenge lies ahead, as her desire to be reunited with her lost parents still burns greater than ever! 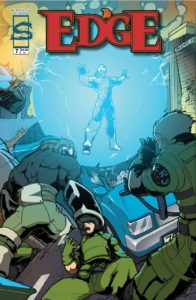 Summary: Chaos and the Reign attack a major city can the strike team and their new allies stop them? With both Bolt and Mystic on the sidelines, what will be their game plan?

It has most certainly been a long time (Around when the first issue had come out actually) coming for me and Marvin Wynn’s The Edge. Long time in the sense of a reunion between myself and this title considering Marvin and crew have been quite busy continuing to bring this comic to life with the most recent release of the 7th! And by the 7th, its rapidly apparent you need score cards or some such to keep up with all the characters that pop up! (Though there is a sourcebook that is related to our Edge team so do be sure to check that out!) Especially all the villains like Revenant (who is quite possibly very nuts), Saleos, and Chaos and his Reign Cabinet. All characters I find myself more interested in then I do the actual heroes. Well, aside from Mystic anyway as that guy has swords and swords are cool. My main issue with The Edge however, is grammatical errors and a little stiffness in the writing here and there. Such as using ‘do not’ when ‘don’t’ would have worked just as well as to me ‘do not’ being used quite a bit makes things feel stiff. So for future issues, I would heavily suggest going through your lettering to ensure things are where they are needed before releasing it. 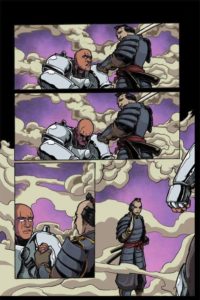 And damn, our heroes certainly can’t catch a break can they? First its Revenant and his nuttyness causing issues (not to mention his best friend Mr. Idiom the Knife), then its Chaos and friends! And from the looks of it, a few shady types who probably want Edgivated individuals for their own nefarious ends. Is Revenant’s issues with Richard Tartabull truly all in his head or is there more to it? Something that wasn’t entirely explored earlier in this story and I really hope Marvin comes back to that at a later time. Plus, I’m curious to see how the nut is handling being around other psychopaths willing to cause a lot of chaos and the like. And while the team is certainly having their problems, Mystic is having an interesting experience of his own and I am liking it. As its kinda like a journey of self discovery in a way and nicely enough, gives him and his swords more of a connection then just a pair of tools for him to use in combat. The whole thing definitely has an impact on him as we see around the end of the issue and I can’t wait to see how that goes in the next and future issues!

In my view, Marvin and his team are doing wonderful with this universe and its a very clear fact that there is a lot of potential to explore all the characters we’ve seen in these 7 issues. We’ve seen a little of that so far and I hope there will be more of it to come. Perhaps in their own spin off runs for example. Things are heating up and only time will tell who survives and who doesn’t.

Editor’s Note: Head here to get your Edge on! 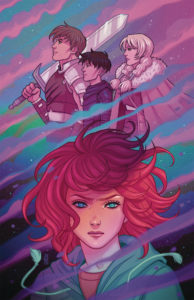 Summary: Lark is a runaway living rough on the streets of LA, when suddenly she’s transported to an alien world of swords, dragons and magic, where everyone wants her dead. And she likely won’t live long enough to find out why!

For several years now I’ve held the intention of reading Bill Willingham’s Fables in full. I’ve always been intrigued by its premise and have always heard good things about the series. So, one day, I’ll get around to it. When I can find the time. Which could mean never. In lieu of that, however, I did pick up Lark’s Killer, the latest Willingham title. (Yeah, I thought it was a strange title too.)

The story here is not an unfamiliar one, especially to those of us versed in fantastical sword and sorcery yarns. The gist: a present day runaway named Lark is somehow whisked back in time (or more likely to a different dimension). And much like a comic-book knight in King Arthur’s Court, she immediately finds herself in trouble, hunted by three mercenaries for reasons unknown. Nothing wrong with that, if within the realm of standard fare. The book begins 100 years after the “main event” when a trio of adventurers meet a fat dragon with penchant for Earthy colloquialisms who relates to them the plight of your young heroine, Kelsey Anne Patchlark. Which, interestingly enough, might actually be the most fascinating part of the issue.

Willingham is old hat in the comic book fantasy realm and Lark’s Killer does seem a bit paint-by-number. While not boring exactly, the book does suffer from the stale plot and the lack of character depth. Lark is the same teenage-ish, somewhat street-wise-ish ragamuffin type lead we’ve seen in countless other comics, not to mention TV, movies and books.The mercenaries tracking her could not be any less frightening. Granted, this obviously isn’t supposed to be a dark and gritty tale, but it’s also obviously not a straight comedy either. As for the art, Mark Dos Santos’ work is fun, albeit, a tad plain and on the cartoony side. Which isn’t necessarily a bad thing and actually works well paired with Willingham’s breezy writing style. Think a watered-down Rat Queens style and you get the idea.

I can’t tell if Willingham has Lark’s Killer on the verge of going somewhere interesting or if it’s destined to walk a linear path of little resistance. I feel like he might be leading us somewhere a little more adventuresome come future issues. But I’ve been wrong before. 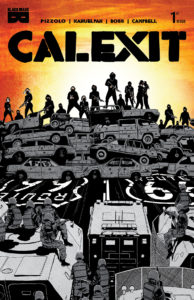 Summary: What if a fascist, autocratic President took over the United States? And what if that President lost California, the sixth largest economy on Earth, by nearly 2-to-1…a margin of almost 3 1/2 million votes? What if the day after that President took power, the largest mass demonstration in history occurred, and the state with the largest turnout was California. And then, the following week, two of the largest international airports in the world, California’s LAX and SFO, were blockaded by protesters? What if California refused to be ruled?

I… Wow. After having this on my hard drive for several weeks now and finally reading it, two things came to mind after finishing it. ‘Holy s**t!’ and I need more were those two things! Matteo Pizzolo has done a fantastic job with this first issue in my honest opinion. Even capturing a certain President pretty well too! Its also easy to see a certain pair of radio hosts are morons given how supportive they are of the President. And when Matteo introduces us to Mr. Glasses, you just quickly come to hate the smarmy jerk as he’s a cool and calm enforcer of the President who’s also very clearly a psychopath underneath the cool and calm act. Its a sort of quiet but clearly present vibe to him as he’s looking for a certain girl. Kudos to Amancay Nahuelpan for bringing this guy to life so well with his art! And Jamil, who seems to be our lead character, or is for a moment as who knows what will happen here in this story. I like this guy a lot. He’s got this easy going nature to him even when he’s giving someone crap or dealing with a tense situation.

Meeting Mr. Glasses for example definitely counts as an example of a tense moment after Jamil gets ahold of something he probably shouldn’t have! You know, I’m surprised California in this hasn’t erected means to keep folks like Mr. Glasses out. Or perhaps they have and they just aren’t that effective. I know one thing, I’d live to see a live action scene be done involving Jamil’s scenes with ‘Captain America’ and ‘Wonder Woman’ as that’s some fairly amusing stuff in its own right. And its interesting that in my second read through of this, I’m just now noticing certain background actions when Mr. Glasses is showing up at someone else’s house. Which is an example of why you should always check out the art from each panel very carefully folks! Or you might get confused! I know one thing though, our gal Zora is a badass. Kind of a violent one, but a badass none the less and hopefully a certain bunch won’t suffer too badly cause of her actions. Though I will honestly clap when creepy Mr. Glasses gets his!

I can’t wait to see how Zora and Jamil will get along after this issue as I can imagine the guy will probably annoy her some! But hey, if you aren’t annoying a girl in some way, you’re not reaching her for a long lasting love! Or something like that anyway!