“Mech Cadet Yu #1 is perfectly paced, a fun comic for readers of all ages.” – Newsarama

“…a splash of unabashed joy on the stands.” – Uproxx

“[Mech Cadet Yu] recalls all sorts of classic robot fiction while still standing on its own as a wonderfully imaginative and colorful new world.” – Syfy Wire 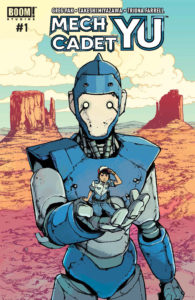 August 19, 2017 (Los Angeles, Calif.) – After selling out the week of release at the distributor level (copies may still be available at local comic shops) and drawing rave reviews from all corners, BOOM! Studios is excited to announce that the MECH CADET YU limited series has been upgraded to an ongoing series.

The superstar dream team of writer Greg Pak (Hulk, Weapon X) and artist Takeshi Miyazawa (Ms. Marvel, Runaways) reunited to deliver the story of Stanford Yu, a young janitor who is unexpectedly chosen to join the sacred ranks of the mech cadets at Sky Corps Academy. Once a year, giant robots from outer space come to Earth to bond with the cadets to defend the world from terrifying aliens known as the Sharg. After he unintentionally bonds with his robot, Yu is thrown into training, hoping to prove he is worthy of being there at all.

“I’m hugely thrilled and so grateful to all of the readers, reviewers, and retailers who showed the first issue so much love and spread the word about the book,” says Pak. “That kind of word-of-mouth means all the world to an underdog book about an underdog hero and his underdog robot, so thank you so much! None of this would have happened without you, and we’re doing our best to make every issue the best and most fun it can possibly be.”

“I feel like we would just be getting on our two feet with the first four issues, so it’s going to be amazing to see where the story goes and watch Stanford and Co. face bigger threats and become even bigger heroes,” adds Miyazawa. “Stanford has come such a long way already. I hope everyone keeps rooting for the kid!”

“Greg and Takeshi are one the of most exciting pairs of collaborators in comics, creating characters with unmatched charm and heart,” says Cameron Chittock, BOOM! Studios associate editor of MECH CADET YU. “It’s impossible not to root for Stanford and his fellow cadets and with even more story to be told, I cannot wait for fans to see how their relationships evolve as they face worldwide threats together.” 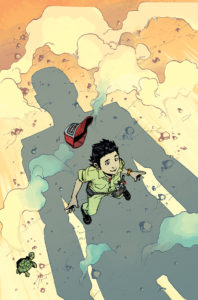 MECH CADET YU is available for sale monthly at local comic book shops (use comicshoplocator.com to find the nearest one) or at the BOOM! Studios webstore. Digital copies are available to purchase on digital book marketplaces, including ComiXology, iBooks, Google Play, and the BOOM! Studios app.

Retailers, please note MECH CADET YU #2 is a BOOM! Studios Guarantee title, with an FOC date of August 21 and on-sale date of September 13.

Fans, place your pre-orders with your local comic shop by August 21 to guarantee your copy of MECH CADET YU #2. The issue comes out September 13.

For news on MECH CADET YU and more from BOOM! Studios, stay tuned to www.boom-studios.com and follow @boomstudios on Twitter.

About BOOM! Studios
BOOM! Studios was founded by Ross Richie in 2005 with the singular focus of creating world-class comic book and graphic novel storytelling for all audiences. Through the development of four distinct imprints—BOOM! Studios, BOOM! Box, KaBOOM!, and Archaia—BOOM! has produced award-winning original work, including Lumberjanes, The Woods, Giant Days, Klaus, and Mouse Guard, while also breaking new ground with established licenses such as WWE, Mighty Morphin Power Rangers, Cartoon Network, and Jim Henson Company properties. BOOM! will also bring their original series to life through unique first-look relationships with 20th Century Fox for film and with Fox Television for the small screen. Please visit www.boom-studios.com for more information. For news and more from BOOM! Studios, stay tuned to www.boom-studios.com and follow @boomstudios on Twitter.