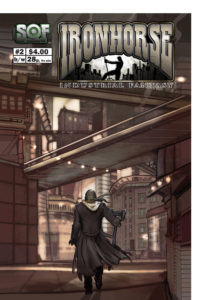 Gavin Spector’s Ironhorse is an interesting world. One with several guilds and it all makes me think of games like Skyrim and other kinds of role playing games with guilds. Guilds like Thieves, Assassins, Witch Hunters and so forth. And as hinted in #1, it seems like there’s some old beef between the Thieves and Assassins. Beef that has the potential to re-start thanks to an event that our main Thieves character Gage gets himself involved in. Which kinda makes me think of the Marvel versions somewhat! I wonder if Gavin took inspiration from games like Skyrim for his world building in the world of Ironhorse or if its just something he came up with on his own from some random burst of inspiration. And while I like Holly Rorke’s art, (though could definitely benefit from color) I have to wonder if some of her art is done through photo stock. As a lot of the faces definitely have a whole lot more realism to them. This doesn’t mean I think its a bad thing or anything but it is an interesting choice to go with if that is the case. And if there’s one thing that these two issues of Ironhorse has over the Blackout special, is that there’s no really dark scenes.

And I don’t mean violent ones, unless you count the fight that happens in issue 1 and see’s someone die. But I mean in terms of visibility. And if you’ve read the Blackout: Beneath Ironhorse special, you’ll get what I mean as certain scenes in that were a bit harder to see then they shoulda been. I get wanting to be realistic, but sometimes that doesn’t always help. And even though we readers, along with Gage himself really knows what happened with Lucas’ girl at the end of the first issue, Lucas himself really doesn’t see it that way. Going so far as to request from his Guild the chance to assassinate Gage for the loss of his lady love. Thankfully, cooler heads prevail much to his annoyance! Though one particular Assassin head’s answer is a little strange to me considering she seems against the idea due to not wanting war to occur again between the Thieves and Assassins (like the other two head members) and yet votes yes for Lucas to make his move. This woman really seems shifty in my view and I have to wonder what she might be up too as this story goes on. Especially if she has anything to do with certain encouragement Lucas receives at one point.

Encouragement that no doubt will cause some huge problems if the truth gets revealed cause of one man’s desire for revenge! Gavin is nicely setting things up here and he makes me wonder if something’s bound to happen between Gage and fellow Thieves member Holly. As one could probably see their little encounter with one another on a job as a sort of first date! Well, if you’re the type to ‘ship’ various pairs of folks anyway! But could a potential thing between our boy Gage and Holly have doom all over it thanks to Lucas’ desire for revenge? Only time will tell! And I’m curious if Gage’s fellow Thieves will find out how exactly he lost his badge. Which is a neat concept for Guild members to have in this world as well in my view. And has me wondering if they keep those when they get kicked out and thrown into Blackout or if they get ripped off. Something I bet would be rather brutal for those whose lives are all about their Guild and seeing the badge as a huge, huge honor. Be sure to check this series out folks, you won’t regret it! And maybe even help support the IndieGoGo project as well!

Summary: Vengeance is on one man’s mind as Gage worries over his missing badge while trying to gain a new score!