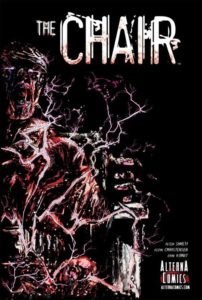 The Alterna Comics graphic novel, “The Chair” follows the story of Richard Sullivan, a convicted child killer, as he faces what are to be his last days on Earth. For ten years Sullivan has stood witness to the savage beatings and murders of his fellow inmates at the hands of the prison’s sadistic guards and its psychotic Warden. Faced with no other option, Sullivan decides that the only way to survive is to fight, but can his brutality hope to match those of the prison itself? Sullivan is forced to come face to face with his own horrifying past and a truth he may have wished stayed hidden.

“The Chair” reminds us that man is truly the most terrifying monster of all and that the horror we inflict on ourselves is often the most cruel. In the mind there is no concept of time. A beating inflicted on a child will continue to bleed as long as the heart continues to beat. We become the people we are through a million tiny, interconnected threads woven in to a dense tapestry of hope and fear beginning the moment we are born and continuing until the moment we die. Who we are is continually created and re-created, changed moment by moment by our actions and inaction as well as by the world, and the people, around us.

When done well, the art work in a comic book will do more than simply illustrate a story; it will create a mood. Much like a film’s soundtrack, it might go unnoticed, but its effect, when done well, can be profound. In “The Chair” artists Kevin Christensen and Peter Simeti create a deep sense of despair, confusion, chaos and desperation. Darkness, gloom, and unease are slammed together creating a claustrophobic sense of unease. Speech balloons twist and tilt, panel borders are replaced by ripped edges and dramatic shadows. In “The Chair” we are looking into some very dark places.

“The Chair” is telling several different stories at the same time. On the surface we are told the story of Richard Sullivan, a man unjustly accused of a crime, sentenced to death and his vain attempt to hold onto his slipping humanity as he is forced to witness the worst mankind has to offer while living out his life as an inmate on death row. Beneath this story however is where things really start getting interesting. Memories blur and reality is often at the mercy of perception. Nothing is quite what it seems and truth, hope, reality, and justice might just mean something completely different to each one of us.

This is a story filled with twists and turns and requires more involvement from the reader than simply turning the page. You’ll have to think as “The Chair” demands the full attention of its readers.

“The Chair” was created and written by Peter Simeti, with artwork provided by Kevin Christensen and Simeti himself. And edited by Erin Kohut.

A film adaptation of “The Chair” is currently running wild!

Editor’s Note: If this sounds like it’d be a fantastic read for you while keeping in mind this isn’t for kids. “The Chair” is available both in print and digital. Head here to find out how you can go about grabbing yourself a copy! Along with learning how you can watch the movie!

Summary: Richard Sullivan has spent the past ten years as an innocent man on death row. After witnessing the savage killings of his fellow inmates at the hands of the prison’s psychotic Warden, Sullivan decides that in order to survive he must match the brutality occurring in the prison. But as he fights to escape his fate, Sullivan is forced to question his sanity as he confronts his own horrific past.