It’s great to make a return to IndieComiX after a lengthy period, due to developing a series of my own (more on that when appropriate), and it’s my pleasure to return with reviewing “The Last Hunt”, from Amigo Comics.

Amigo have built a strong reputation for building great Horror books, which included the break-out hit, “Straightjacket”, in addition to other fine titles.

One thing that caught me with the opening of this book, is it gets straight into the action, we’re clear about what’s happening right from the start, with artwork that complements the tone.

The interplay in dialogue between the characters is fairly natural and organic, though contrived in places, but then a lot of mundane dialogue between people frequently is, at the least, the script is not reducing itself to much unnecessary small talk.

Why, one of the characters, Steve Ryan, is quite happy to share the gory details of his philandering sex life, which is a little vulgar in places, so if the intention is to make this character quite repulsive to us, it’s worked. That said, this isn’t a negative critical comment, because Steve’s ways serve as a point to drive the story along, so the element is necessary.

The unfortunate part of the character dialogue is that I didn’t feel I got to know anyone to any real depth, at present, the only character I remotely have any feeling towards would be Steve’s Partner, Lizzie, who is apparently completely oblivious to Steve’s extra-curricular activities with another crew member, Lucy. 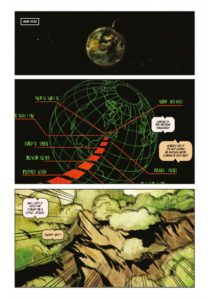 It’s a little hard to swallow that Lizzie doesn’t have some idea of what Steve is doing, especially in such a relatively confined area, but perhaps she is, but choosing to dismiss it, due to the fallout that would occur by confronting him over it, or Steve is very good at covering his tracks.

There’s potential to expand upon this thought and create for a very inconvenient moment in timing for when the story heats up, adding greater pressure to a stressful situation, which can increaser the tension levels, so let’s see how that plays out.

At this point, the book feels a bit like “Alien” meets “Days Of Our Lives”, frankly, I felt that I’m learning more, at this stage, about the general, everyday dialogue of people that have been together for some time.

This is fine, to a point, but when you’re walking into a room of people you’ve never met before, and you’re seeing their personal history, resentments and back-stabbing behaviour unfolding in front of you, it’s very awkward and kind of makes you want to walk back out again. I’m not sure if that helps or hinders, in this case.

The basic plot drives along at a reasonable pace as an opening issue, though I would personally want to see greater expansion on how Earth became the desolate place it now is, and since I understand the series is to be for 4 issues in total, I can’t help feeling that room could be better used on that, rather than filling it with chit-chat between the crew, which could be spread out into subsequent issues.

The atmosphere certainly works, Paul Moore’s art is quite minimalistic in style, but this doesn’t hurt the book, the roughness of the work gives us a sense of “graininess”, coupled with the sharp, vivid colours of Beth Varni, the frequent use of musty green tones give the book an eeriness to it. 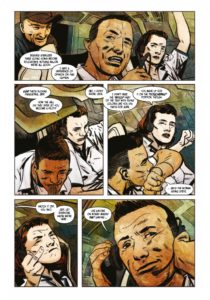 It’s certainly a throw-back to an era of cinematic treats, “Alien”, being the most distinct likeness, with the attitude and atmosphere of John Carpenter, a la “Prince Of Darkness”, perhaps a touch of “Event Horizon” and Steve Niles’, “The Disciples” thrown in for good measure, this book is DARK, that much is for certain.

Overall, not a bad debuting issue in itself, I just felt disappointed that I haven’t learned more about the surrounding universe first of all, sacrificed for the detail of the drab existences of our characters. It’s not their drab lives that bother me so much, this aspect adds a level of dirge to the feel of a book, when played right, but there was just too much, too soon.

Balance is important when driving a plot, too much of anything is a bad thing, and the problem you face with an untested project in a first issue, is this is where the “Hook” is all important. I’d be interested in seeing how the second installment unveils itself, but I would hope for more development in this respect to keep me on board.

There’s enough here to provoke curiosity into looking further into the title, but the superfluous aspects of this issue concern me, 4 issues is a short time to establish a fulfilling story, so the use of every page and every panel is vital. There’s a fair bit of information to give us background, but was I “hooked”? Not as yet.

Hannu Kesola is a well-established Author, behind “Blood, Skulls & Chrome” for Rats & Crows Publishing, plus various work in “Heavy Metal” magazine, so despite the critical aspects above, it’s not a reason to lose faith in the work, it’s a moderate first quarter of the story, the art and atmosphere alone is worth looking at a second issue, but a stronger drive on the story will be required. Judging by the end of this issue, I’m optimistic for this to happen.

In closing, I’d rate this with a 6 out of 10, but with a cautious level of balance that is disturbingly rocking between a 5 and a 7, depending on how the story unfolds. Tread carefully, you never know what’s out there!

Editor’s Note; The Last Hunt #1 is out this month in your local comic shops, but you can head right here to see about acquiring yourself a copy!

Summary: The year is 2232, the cargo ship, “Ragzon”, a mid-way delivery cargo ship, makes an emergency landing on a now wasteland Earth. While recovering cargo from a drop-point, they also pick-up 3 unexpected guests, who are not what they appear to initially be…