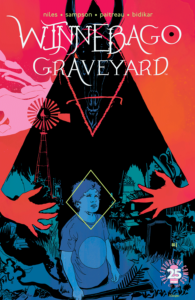 I hate to lay such a critical hammer to something that obviously took a lot of effort to make. I really do. But with several new titles and first issues being launched every week, competition is thick. If you don’t stand out you might as well be sitting down. And while Winnebago Graveyard tries to stand up, a wobble is the best it can manage before collapsing under the weight of a weak story, characters so bland it hurts and an artistic style that does nothing to help this new title from Image.

Winnebago Graveyard intros in with a horde of hooded figures kidnapping a naked couple from a nearby hotel then proceed to brutally kill the man who then is re-animated and made the vessel of another being of some sort that the hooded figures call forth. I mean, as far as I can tell anyway. There’s buckets of blood and guts and, not to mention, strategically blocked nudy bits. Got your attention so far, right? Unfortunately for the story, things go south after the gory introduction. Next we meet Dan (the frustrated stepfather), Christie (the stressed out mother and stressed out wife) and Bobby (the smart-ass son/stepson) traveling in high style across the land in their Winnebago. (“Winnies” to all you non-Winnebagoers out there.) Dan nearly wrecks the Winnie after Bobby smarts off to him (I warned you he was a smartass!) which leads to the family pulling over and taking a break near a sign for a circus down the road. Well, you can guess what happens next. When our trio makes it to the ultra-creepy, decrepit and defunct looking “circus” that no one in their right minds would ever visit, they realize the foolishness of their plan and turn around and head home. Nope. Just kidding. They sally forth into inexplicability. They return to find their Winnebago (which looked like it was parked 10 feet away) gone and on their own they make their way into a, you guessed it, mysterious town down the road. So to summarize: I’m not sure what the hell is going on. 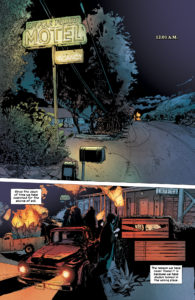 Compared with another new Image release back in June, Kill The Minotaur, Winnebago Graveyard is a fail on all fronts. Where as the former had it all: great art, interesting characters, action, plot twists, world-building; Winnebago offers, quite literally, the exact opposite. Admittedly, the uber-sadistic first few pages manage to create a stir but any fast capital it creates is soon spent when the scene cuts to the Dan, Christie and Bobby. The characters’ dialogue, their behavior, their actions all come off as silly at best, downright nonsensical at worst. The story breezes to the end with no heft or substance and no sign of clarity, which normally, might be fine for a longer format, but this is a four issue mini-series. You gotta light the fires and kick the tires, big daddy. There’s no time to waste but it seems as if that’s all Winnebago does.

Alison Sampson’s art is not fun to watch either. While I will say that her darker imagery, the nighttime desert landscapes and surrounding scenery, do carry a creepy, haunted weight, everything else here is quite a mess. It’s hard to tell if Bobby, Dan and Christie are supposed to look like they’re all suffering from a non-ending battle with diarrhea, but either way, they’re certainly not any fun to look at. 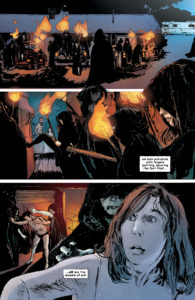 Image, and other indie publishers, simply put out too much other good stuff for Winnebago Graveyard to compete with. I truly wish I had better things to say about it. The premise isn’t awful, although unless it goes somewhere else in the next three issues, it’s a fairly generic one. This story could work. It’s comics. Any story can work. But not here. Winnebago Graveyard is something quite unworkable indeed.

Summary: An American family traveling on vacation finds themselves stranded in a small town with a sinister secret.