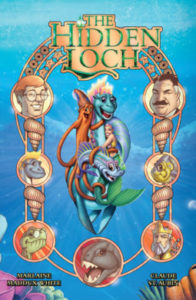 So I was recently approached by a member (you’re awesome, Julia!) of Penny-Farthing Productions, Inc. about checking out their most recent title known as ‘The Hidden Loch‘ by Marlaine Maddux White. And I thought why not, as it sounded pretty interesting! Not to mention, nicely enough, allowing me a chance to read the original ‘Loch‘ series from the early 2000’s. Special thanks to Julia for that one! Now what I didn’t expect once I received my copies in the mail, was that this is essentially a children’s comic book story. Which I have no problem with at all and find it nice to see more comic books geared towards kids. The original three Loch titles even has a sweet little glossary section at the end of each book that is quite informative too for those with a thirst for knowledge. Now, I’m not sure if The Hidden Loch will have something like that considering I have an unfinished copy, but if they do, it would be a nice way to continue having a glossary with this particular series.

The fact I have an unfinished copy didn’t keep me from enjoying the story that The Hidden Loch has. It did give me a kick to the gut though where my feelings and Granny Ness are concerned however. Now you might be wondering, is it necessary to read Loch first before trying this out since Loch came out first? The answer would be no. Sure, The Hidden Loch is something like a prequel featuring a much younger Nessandra and friends, but its really its own separate thing from the original storyline due to it being a re-telling. Which might be a little confusing for some unless you go into this knowing its its own separate thing. Of course, kids probably wouldn’t even be bothered by that however.

I love that Marlaine makes use of mythical figures like the Loch Ness for the Loch and The Hidden Loch, including other under water creatures we’ve heard of over the years but might not actually get to see for whatever reason. Her writing gives you that feel that these characters truly do know one another for years without actually needing to read years worth of content just to see that develop. The art and colors (when its there at least) is just as beautiful to see here as it was in the original story. Even if the creative teams are entirely different for that matter as well. Many kudos to Claude St. Aubin, James Taylor, and Mike Garcia for their work on this book!

Perhaps two of the most heartfelt things in this book, is the loss of Grandma Ness and young teenage Allura’s angst considering she’s not really like the other natives of the Loch community. Basically being a Mergirl (or rather, an Emperian) who was adopted after being found by Nessandra’s parents when she was younger and not really having any memories of who she was before that. Some actions on her part help set Nessandra and friends on a path she hadn’t expected to happen and probably wishing she hadn’t of done it at various points! Despite the little we saw of Grandma Ness, her loss is still profoundly felt and shows just how horrible humanity (or as our Loch residents like to call them, ‘Drywalkers’) can be in their quest for knowledge of the unknown instead of being kinder about it. 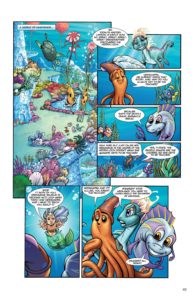 Which certainly comes back to bite them in the butt later on nicely enough! Readers like myself get a little bit of everything in this story and I think its great. From acts of friendship, family, loss, adventure, owning up to your mistakes, learning that not everyone from the surface is all bad, and personal growth from those experiences that help shape you to become a better person then what you already are. Its all here.

And I’m happy to have been able to experience it and I hope you folks will be able too as well when the time comes. If I had a kid, I would be passing this down to them so that they too could enjoy the wonderful world Marlaine has brought to us in both Loch and The Hidden Loch. So if you’re looking to enjoy a great comic with your kid as a bonding experience, I would definitely recommend picking up The Hidden Loch! And perhaps Loch as well if given the chance!

Editor’s Note: The Hidden Loch will be available in August 2017, but don’t let that stop you from pre-ordering right here! The story is also available in paperback and hardback on Amazon!

Summary: There is a separate world secluded deep beneath Scotland’s infamous Loch Ness. It is called THE HIDDEN LOCH and it has existed for thousands of years as a serene community of “extinct” and “mythological” creatures—totally unknown to the human world above. In order to find the answer of how to protect this ancient ancestral realm from encroaching humans (Drywalkers), Nessandra, a young plesiosaur, is forced to depart the safety of her secret underwater paradise to embark upon a journey of tantalizing discovery. She, along with her three brave companions, is destined to learn that the vast ocean depths lying before her are a far more dangerous and awe-inspiring place than she and her friends could have ever imagined.

Their adventures transform their understanding of the world at large —especially as it has evolved in ways which are a stark contrast to what they had always known to be “true” while growing up in The Hidden Loch. It is a time of great crisis—even impending doom—for The Hidden Loch, and the outcome of Nessandra’s critical mission may well determine the ultimate fate of that unique and beautiful world she (being the last of her kind) calls home!