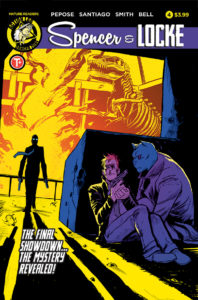 The end is come and what a finale David Pepose and the gang have given us. It’s often hard to find a series of any length that can maintain its quality and freshness throughout but the Spencer & Locke team done it lock, stock and smoking barrel. Pepose has found a way to not only wrap things up as fun and furiously as he has laid them out over the previous three issues, but also give readers a complete tale with an ending that satisfies and is self-contained, just in case this is a one story ride. Although, let us pray now, to the comic book gods, that this won’t be the case.

Taken as a whole, Spencer & Locke is a non-stop action machine infused with some serious heart and grit; a premise that stays true to the very last page. Between the bouts of action and twisty surprises come truly touching moments that actually feel legitimate as opposed to filler material lesser writers unconvincingly use simply because they think it’s what their characters should say at particular moments with color-by-number dialogue. It’s rare indeed to find a comic book scribe today that can give me a case of the ol’ moist-eye feel goods (though there are obviously several: BKV, Lemire, occassionally Mark Millar, to name a few) but Pepose has certainly entered the pantheon. I’m not saying I cried but I will say the pages started to look a little blurry after the scene where Spencer, watching over a Hero who has just realized the one-eyed stuffed panther is real after all, tells her he’s “as real as she needs him to be,” the same words he said to Locke when he was also a child who was all alone in the world. 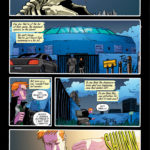 Santiago is the Tonto to Pepose’s Lone Ranger, if you will. Characters snarl when engaged in action, soften appropriately during moments of tenderness, spring into wide-eyed wonder as secrets are revealed and people get shot. (Who gets shot, you ask? I’ll never tell. Read the damn book already!) If I had to guess, I’d venture that he’ll return to at least one S&L sequel as it would be hard, though surely not impossible, to recapture the lightning in a bottle he and colorist Jasen Smith have caught here.

I have a feeling we haven’t seen the last of Spencer & Locke. There’s just too much to mine here. Pepose has done a 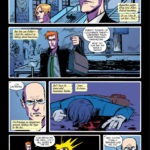 grade-A job in both story and character development in such a short amount of space and I’m sure he has a notebook somewhere filled with a million ideas on where to next take his creations. And while I’m an anti-fan of overkill, I believe there are still many worthy tales awaiting the detective duo. I’m happy for the creative team on the recent announcement that the series has been optioned for a film but I don’t see any way it can top the actual series itself. It’s just too good. Spencer & Locke is going to be one of those runs we’ll look back on over the years that stood out heads and shoulders above the rest and set a new bar for creators to follow.

Summary: The end is nigh, as Spencer and Locke square off against Locke’s crime lord father, Augustus, with a child’s life hanging in the balance! Can Locke survive against these overwhelming odds? Does he even want to? And who killed Sophie Jenkins?