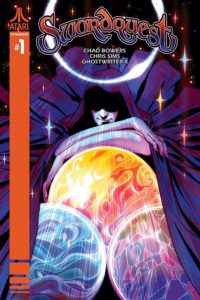 I came of age at the tail end of the Atari 2600 era. I can hazily remember playing my brothers’ system and of course some of the more infamous games such as Pitfall and Pole Position but I don’t have the same childhood nostalgic connection as I do with, say, the NES, SNES or Sega Genesis systems. So it should go without saying that I’m not familiar with Swordquest. As a matter of fact, I wasn’t even aware of the game until the series started. And while Swordquest the comic is mostly a ho-hum affair I can at least appreciate the pop culture knowledge it has added to my repertoire.

The intial set-up of Swordquest is intriguing. A dying man finds his long-lost friends and attempts to convince them that they need to help him retrieve the actual sword from the titular game they played when they were younger. The writing is a bit clunky, especially the dialogue. Ghostwriter X’s art is passable though nothing out of the ordinary, but at least it’s clean and colorful. As I said, the story in itself is interesting and could, normally, translate very well (think Stranger Things with grown-ups), though this particular outing with this particular creative team doesn’t quite get it there.

There’s nothing just awful going on with Swordquest and to be honest it was mildly fun. There were several scenes that that led me to believe it was going somewhere interesting but, ultimately, the story fell flat. The characters are wooden and plain, and, at times, downright annoyed me. Still, it might be worth a read if you’re into Atari games, either because you’re old enough to remember playing them or because you think they’re ironically cool after you found a 2600 at a flea market. I could easily see how having a connection with the source material could elevate the enjoyment of the book despite its overall averageness. But for now, on to more important issues, like where’s my Pitfall mini-series?

Summary: The Atari Age returns to comics with the most unexpected story of the year: SwordQuest! In 1984, Peter Case was on his way to being crowned champion of SwordQuest, set to win the last of four contests and lay claim to a golden sword worth over $50,000! But when the game was discontinued, Peter found himself without a game to finish. Now, over thirty years later, Peter’s stuck in a different kind of game entirely — the game of life, and he’s losing fast. But when he learns that all the prizes meant for the SwordQuest contest of his youth are on display in the World Arcade Museum, he finds an unknown determination that sees him put together a team of like-minded losers for the ultimate heist job — a real-life sword quest! The red-hot team of Chris Sims, Chad Bowers, and Ghostwriter X (Down Set Fight) have a new game — and the stakes have never been higher! 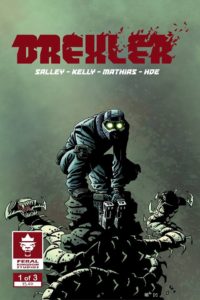 Summary: A small town will unleash a monster to save them from something worse…

For awhile now, I’d see bits here and there of Drexler. Either thanks to Bob Salley or Nathan Kelly over on Facebook. And every time I saw any of it, I knew I had to check it out to experience what Bob and Nathan were up too with this. Thankfully, Nathan was awesome enough to let me have the opportunity to check out the first issue! Hell, I found myself more curious about the backstory of certain events more then I did about what was currently going on with girls getting attacked by something unpleasant! Thanks for that Bob! The fact Drexler and his Detective sister Cara Ramon are mixed siblings is pretty cool as you don’t really see that too often in comics. Or at least I don’t so I’m probably looking in the wrong places! I gotta feel sorry for Cara though since she’s stuck in a place where her fellow villagers seem like a not so great bunch of racist jerks towards Aliens. And I’m guessing that’s one of the reasons Drexler isn’t exactly liked by them aside from his loving sister. Not that he cares what they think of course!

And McKinney, sorry to tell you this, but humans are just as capable of the brutality you came across with one poor girl. Who’s rather nude too unfortunately (as who wants to be found in the nude in a horrific way!?) and I have to wonder if the cause of her (and several other girls’ deaths) death was responsible for that or if she was already that way to begin with before her gruesome demise. Nathan and Bob aren’t shy about the nudity seen here either and that’s a bit refreshing in my view. As it does get annoying when nudity in a comic is blocked in some form or another. As why even include it if you’re just gonna hide it in some way? Let the nudity be free! Ahem Sorry about that! In addition to Nathan’s fine artwork that would probably look quite at home in a cartoon as well, Don Mathias’ colors helps bring it to life beautifully. HdE’s lettering gets a bit colorful too in some cases and that’s nice as well. Especially when it comes to chit chat over communications. While we clearly know what Cara is in her corner of the world, what exactly is Drexler other then a soldier of fortune? Does he have a regular 9 to 5 job or is all he does is the very odd job?

Like interfering in weapon sells and ruining the days of bad guys everywhere in the process? Who knows, maybe we’ll learn as the story goes on. But if not, I can live with that! After reading through this a second time, the nasty looking critters Drexler, his sister, and the not so cheerful fellow villagers are dealing with reminded me somewhat of the ones you see in the Starship Troopers films. Makes me wonder if Bob and Nathan took any inspiration from that or just instead went all in with their imaginations. And remember folks, the imagination is a Hell of a thing! Now I don’t know about anybody else, but I’m kinda hoping that by the end of this three-parter, (with the hope of more to come later) that the McKinney bunch end up the way of the Do Do as ain’t nobody got time for jerks like them! Hell, I was honestly expecting McKinney to use that axe on Drexler after our main man told him to start swinging when the action got started! That axe though probably will end up being more preferable in Drex’s mind considering what he comes across at the end! Damn cliffhanger! My thing is though… Why is this ugly critter in bad need of stomping going after girls?

And putting strange devices on them as well? Some form of attempted breeding or otherwise? Whatever the answers may be, I look forward to finding out in the next two issues when the time comes! Comics like Drexler are why you should be taking a risk with Indies folks! So grab yourself a copy and join in on the mystery! Cause Drexler? He’s better then all the Wrexlers!

Editor’s Note: Head over to the Feral Kingdom Studios page to find out how you can grab a copy of Drexler today! 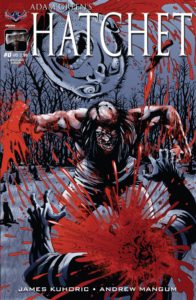 Summary: Victor Crowley returns to terrorize comics in a brand new comic series! In 2006 film maker Adam Green released a new American horror movie that paid homage to his favorite monsters. The movie was Hatchet and it told the story of Victor Crowley, a deformed child that came back to life as an unstoppable killing machine. Cursed to live out his terrifying last moments again and again, Crowley brutally murders anyone foolish enough to enter his swamp sanctuary. Filled with over the top gore, classic movie monster horror, and a boatload of black humor, this is the ultimate comic for fright fans!

What is it about “B” Horror movies that we love so much. I mean they are usually not the greatest things out there and are usually over the top in terms of well boobs and blood. Yet we love them and it’s almost inexplicable as to why. Could be because we know this is so bad it’s good and that this isn’t anywhere near what real life could offer so we can let lost in the sheer absurdity of this man-creature ripping people apart left and right. Well we also love violence and better to see it on the screen like this than actually do it. Still it’s now a well honoured and beloved medium and what i’m loving about this is that James takes it to the next level.

Comic Books offer a very unique way to take a “B” Horror movie and make it into something so much more. The possibility for a lot of characterisation and background information to get the audience to care about this soulless killer or at least find hope in a hero or heroine as the case may be to finally find a way to put that tortured soul to rest. Either way we get some wonderful opportunities to meet new and old characters, flesh them out even more and have that perfect opportunity to showcase the talent in bringing this all to life in ways that only comics can.

Andrew and Gene get to do work on the interiors here that is utterly fantastic. Yes blood, gore and the more subtle uses of horror and violence all grace the pages and seeing the imagination and creativity in Victor and his victims is phenomenal. Without having to rely on makeup to make an actor look this way the artwork makes it seem real and believable. There are times when some of the victims look a little unrealistic but hey it’s a horror comic and that shocked look of surprise that can mistaken for a sex doll’s mouth that’s okay. The use of page layouts here with their angles, perspective and backgrounds make this what it is and without it the story wouldn’t be as successful.

I love that this is an unapologetic rendering of the movie in comic book form. That it takes us through the movie and gives us a unique and new look at the characters and where it could be going from here. That the story itself has dimensions and depth to it that may surprise some readers is a great thing to see. This is an introduction to the franchise that covers old and new material in ways that will thrill anyone who reads it. Overall this embodies EVERYTHING we love about the “B” Horror Movie in it’s pages!

Editor’s Note: Head here to find out how you can grab up a copy!