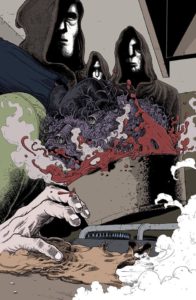 I wasn’t entirely sure of what to expect from this preview (even forgot it was a preview and not the full story) but by the time I finished reading it, I seriously wanted to read more of the story. I mean… I seriously enjoyed this more then I did the last comic book I read as I didn’t want to stop until there was nothing left. So kudos to Ash Deadman and Matthew Hardy for causing that to happen! Not only are they brilliant with the writing, but so is Clark Bint with the art and Edward Bentley on the colors. As those two manage to give just about every character we see in the little village of Fadfield their own distinctive looks that you would possibly see in a real quiet village. People I wouldn’t mind meeting either in this comic as well! Well, so long as none of them

had some sort of petty spite for me anyway! D.I. Rutherford (Our main Detective man of the story) seems kinda like an old school guy but his attitude makes for an argument on that. Not to say that he has a bad attitude, far from it. Unless you’re someone in charge and don’t like a somewhat mouthy guy.

Bonham is another character we see early here. And he’s a fairly likeable guy, even with the numerous ‘sirs’ he puts out! Good to have respect and all but sometimes its best not to over do it. Especially if you don’t want to seem like you’re trying to be a suck up! And I like that Rob Jones’ letterig isn’t exactly traditional for this comic. Though one might have to look closely in order to understand everything but that might have just been an issue on my end considering I’m reading my preview copy digitally. One thing I wanna say however, is that in the future, you may want to carefully go over your work and then have someone else do so as well so you can avoid any spelling errors like mistaking ‘bought’ for ‘brought’ before sending your work to the printers. Now mind you, this didn’t take me out of the story and I probably wouldn’t have even noticed that if I hadn’t been reading so closely to the screen at the time. And though we’ve only gotten a small glimpse of Rutherford and Bonham’s burgeoning partnership, I can honestly say I wouldn’t mind seeing it for a long time. 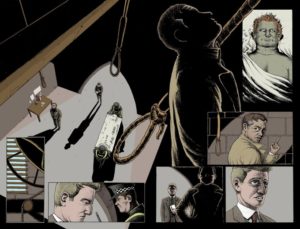 They could easily be the new Riggs and Murtaugh! Only without one of them being suicidal for a while of course! Granted, this all depends on how things go in the course of their investigation of a dead body. And from the looks of things, it might not be an easy case to solve! But if it was, then we’d probably not have much of a story here! Not gonna lie, I’m curious about what’s going on at night with some of the townsfolk, and with the weird trance Bonham seemed to find himself in. This was a fantastic preview that left me wanting more and hopefully I’m not all that alone on that either! I’d also like to mention this is currently on Kickstarter to help fund the creation of the full on Graphic Novel. So head right here to help out! Or ol’ Rutherford might have a word or two to say to you about that!

Summary: Everyone loves a gruesome murder mystery, but how many murders are too many? And it seems only the newly appointed Inspector Rutherford may be the only who cares…