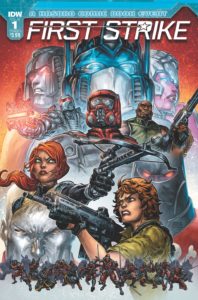 This six-part, bi-weekly series will feature the talents of writers Mairghread Scott (TRANSFORMERS) and David A. Rodriguez (SKYLANDERS), with art by Max Dunbar (DUNGEONS & DRAGONS), and colors by Ander Zarate (MICRONAUTS).

Earth’s heroes have united after the explosive events of last year’s REVOLUTION! Bringing together G.I. JOE, ROM, the MICRONAUTS, M.A.S.K.: MOBILE ARMORED STRIKE KOMMAND, ACTION MAN, and the TRANSFORMERS, Earth has never been more secure now that it has become a member of the Council of Worlds due to Optimus Prime’s leadership.

But oversight and control isn’t what everyone wants; especially when that control is in the hands of alien forces…

The premiere season of post-REVOLUTION titles are heading towards their natural conclusions to make room for First Strike so fans can enjoy the action in one place (and go easy on their wallets during the event)! In addition to the main series, six additional one-shots will set the stage for the second season of the Hasbro comic universe, where fans will witness their favorite characters forming new alliances, paving the way for exciting adventures to come.

These one-shots will explore more corners of the event for completest readers who just can’t get enough, while also providing a glimpse into what the future will bring for our heroes when the dust settles on the scorched planet of Cybertron at the conclusion of First Strike.

IDW’s Editor-in-Chief, David Hedgecock says, “This is what REVOLUTION has been building towards over the past year. It’s been an exciting first season of action in the Hasbro shared universe which laid the foundation for all-new stories and adventures, but now with FIRST STRIKE, we’re shaking things up and, once again, disrupting the status quo forever. It’s a perfect time for readers, new and old, to jump on board and join us for one raucously fun ride!”

The event kicks off in First Strike #0, now available as a GIVEAWAY in comic shops (ask your local retailer) and online at idwpublishing.com/first-strike. Inside you’ll discover more of what Joe Colton is plotting against the TRANSFORMERS and what our Earth’s heroes are up against! (Available while supplies last.)

In the back of the #0 issue, you’ll find a handy checklist for the entire event running through October, as well as a couple new #1s scheduled for November and December titled G.I. JOE: UNMASKED and ROM & THE MICRONAUTS, respectively. Keep checking the IDW site, as well as following IDW on social media, as more info about these exciting new titles becomes available!

IDW Games’ diverse line-up includes the international phenomenon Machi Koro, as well as hit licensed games such as X-Files, Back to the Future, The Godfather, and TMNT.

IDW Entertainment serves as the worldwide distributor of Wynonna Earp airing on the Syfy Channel in the U.S. and is producing BBC America’s Dirk Gently, based on the bestseller by Douglas Adams starring Elijah Wood and Samuel Barnett.

About Hasbro
Hasbro (NASDAQ: HAS) is a global play and entertainment company committed to Creating the World’s Best Play Experiences. From toys and games to television, movies, digital gaming and consumer products, Hasbro offers a variety of ways for audiences to experience its iconic brands, including NERF, MY LITTLE PONY, TRANSFORMERS, PLAY-DOH, MONOPOLY, LITTLEST PET SHOP and MAGIC: THE GATHERING, as well as premier partner brands. The Company’s Hasbro Studios and its film label, Allspark Pictures, are building its brands globally through great storytelling and content on all screens. Through its commitment to corporate social responsibility and philanthropy, Hasbro is helping to make the world a better place for children and their families. Hasbro ranked No. 1 on the 2017 100 Best Corporate Citizens list by CR Magazine, and has been named one of the World’s Most Ethical Companies® by Ethisphere Institute for the past six years. Learn more at www.hasbro.com, and follow us on Twitter (@Hasbro & @HasbroNews) and Instagram (@Hasbro).