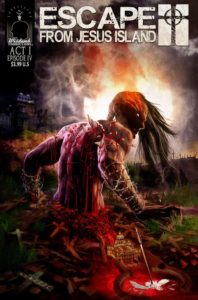 Boy has it been one HELL of a wild (and gory) ride here in the world of Escape From Jesus Island! Shawn French really doesn’t hold back on anything in this wild ride from his (insane?) imagination. One helped brought to life by Mortimer Glum as well. And I’ll say this, ol’ Lithe has a face not even a mother could love. A highly demonic drunk one might but even then that’s up for debate. I kinda wonder how used to not being listened too he is on things when he tries to council Damien. But given the circumstances involved, its likely this is one of those situations where council isn’t a thing Damien’s interested in. And yeesh, the more I read of this series, the more I hope certain characters really and truly get their just desserts.

Aleksandra being one of many in that viewpoint and I wouldn’t be surprised if Damien ends up doing something truly horrible to her by the time Shawn ends this story. Then again, by the time this story ends, I imagine all sorts of horrible things are gonna be happening to a whole lot of people. And not just those on the island Damien and his fellow clones are on! Speaking of those clones, I might have mentioned this before, but I really love the creativity put into these guys by Shawn and Mortimer.

As they really let loose with their imagination in order to show the kinds of horrors that there can be when it comes to cloning. Horrors not even the blood of Jesus can prevent it seems like as we see each clone quite possibly worse then the previous ones. Each of them ready to strike out and get revenge for their poor treatment. And stuck in the middle of it all is our extraction team we’ve been riding along with since issue one! Who are more then likely wishing they had never agreed to doing this job to begin with! Though the fact they can still bicker about things shows they are pretty good at keeping a level head so there’s that at least. Mary especially you have to feel sorry for as she’s in a seriously screwed up situation she never should have been placed in to begin with. And you can only hope she somehow makes it off the island. But somehow… Somehow, I don’t think Shawn and Mortimer plan on any happy endings where this series is concerned! Even Anna might not get the happy ending she’s after! Then again, I could always be wrong but it’ll be a wild ride to see how that all goes down! I honestly love how well done some of the expressions we see in this series are. Kudos to Mortimer on successfully pulling that off! 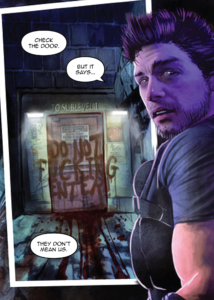 If this isn’t adapted for an animated film of some kind with Mortimer at the helm of it, its gonna be a true crime in my view. As I couldn’t imagine anyone else but him on that job for an adaptation. The future seems bleak for Joe and Mary, a future I’m looking forward to seeing unfold in future issues. As it’ll be interesting to see how they escape their latest situation! One that’s bound to be pretty rocky too now that Lithe has come across certain information Anna would have rather never be seen by him, Damien, or any other clone! So if you’ve been on the fence about this series cause of what its about, now’s the time to get off and give it a chance! As who knows, you just might like it!

Summary: Trapped in the tunnels beneath ReGen Corp’s Malsum Island Research Facility, the Vatican Black Ops try to elude the Antichrist’s mutant horde and learn the horrible truth about What Lies Beneath.