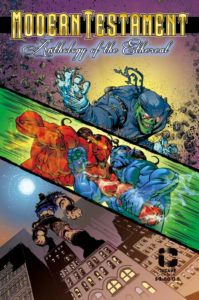 HOT DAMN! Frank Martin has done it again with this third volume of the Modern Testament series! Not to mention no happy endings to be found in this like in the previous volumes! Well, unless you count Bad Djinn more or less getting his way in ‘Shoulder Djinn’ as he and Good Djinn hover over a kid and try to get him to either on the good or bad side of things. I really like Frank’s interpretation of the whole good guy/bad guy shoulder figure we’ve seen in various forms of media that try to help a character out for good or bad. Young Tommy clearly has some rough happenings going where his mom’s health and bills are concerned. And sure, playing it safe helps keep you out of trouble, but in the end, it doesn’t necessarily help you or your mom out. Which means some tough and unpleasant choices have to be made unless you’re able to find something to help you out that’s more on the legal side of things. Choices that could possibly benefit you or see you in jail or worse.

Red means bad in this case!

And we basically get to see that play out as the story goes on. Lucas Urrutia and Ezequiel Dominguez do a really great job of bringing the story to life with their art and colors. Allowing us to really see the struggles Tommy has as he makes certain choices while the two Djinns bicker with one another (and get a little violent) while trying to guide him. Just how old Tommy is is a bit unclear but it is clear he’s somewhere in his teens.

I like that we basically get two stories going on here in ‘Shoulder Djinn’, Tommy’s situation and the debate (that’s also somewhat violent as mentioned previously) between the two Djinns as Tommy makes his choices as he and his friend Rico do their thing. One kinda wonders if the bad Djinn’s view of things is a little bit colored due to his own unpleasant experiences or if he just geniunely thinks that since he’s the bad guide. Kudos to Frank for doing an excellent job when it comes to this story when it comes to the choices one has to make in life when things aren’t that great. And whether or not the events of this story will have consequences for Tommy remains to be seen. Good luck, kiddo! 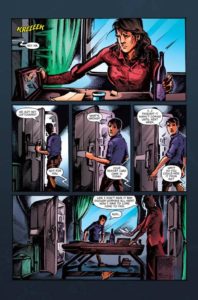 ‘The Abandoned’ is a story that makes you really feel for this kid we see in this second story, as unlike Tommy’s caring (and sick) mother, this kid’s mother is a sorry excuse of a woman who doesn’t deserve to be called ‘mother’. Kudos to Frank for making one feel like that and were this kid a whole lot angrier, things would have more then likely gotten pretty ugly for his ‘momma’. Francesco Conte and Macarena Cortes do a great job here. Especially when this halfling does a shift of sorts to get an edge over his mom. And if his pops did care, I think he’d probably be more ashamed of his baby momma then of his kid. As this lady needs to get her head out of her ass and far away from a bottle! Hell, I’m surprised the halfling (or rather… Nephilim) hasn’t ran away yet since he could probably defend himself pretty well out in the world! In a way, this kid is probably what other kids want to be like in horrible situations like this. Wanting to confront their tormentor but being unable to do so cause of fear and a lack of back up of some kind until possibly later in life.

I could easily see this kid doing the exact opposite of his ‘loving’ parents when he has his own kid later on in life since he’s happy being nothing like his dear old dad thanks to his ‘loving’ mother helping him realize that more or less in their confrontation. Which I bet ends up saving a ton of money where therapy’s concerned! I’m curious though, are we gonna see all these characters we’ve been introduced too since the first volume in one place? Either working with one another or against one another when it comes to the Four Horsemen? With 3 out of 4 of the Horsemen that we’ve seen so far, with the third being introduced here and could probably pass for a Namekian if he wanted! Maybe I’m getting ahead of myself or just being hopeful, but I think it would be great to see all these characters in one spot and being completely surprised by what some of them can do! Especially where the Nephilim kid is concerned!

Pestilence’s bedside manner in ‘Down With The Sickness’ (Disturbed anyone!?) is awfully cheerful for a green guy and member of the 4 Horsemen! Which is probably a sign to be wary of right off the bat! Hell, he’d probably get kicked off the Namek (Dragon Ball Z for those who don’t know) planet cause of how he is! Probably end up being the Namekian version of the Boogieman too for little Nameks as well. 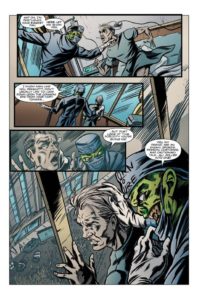 I wonder if Pestilence’s greeny looks was intentional or just something Frank let Matej Stasko run wild with to show just how other worldly the Horsemen can be. Or, well, at least one of them anyway! Granted, no telling what Death is likely to look like! Though if I remember rightly, I believe in the first volume it was mentioned that Death’s a doctor. Which is kinda freaky all things considered! And like with the mom in the second story, the guy you see in this third story isn’t really someone you want to feel all that sorry for since he chose to focus solely on himself while pretty much saying ‘screw you’ to everybody else. Yeah, your health is failing you, but that doesn’t excuse you from basically locking out others like this guy did just to save himself. Along with potentially costing many their jobs if and when the company he runs goes under!

You know, I kinda wouldn’t mind seeing Jim Carrey do a live action take on Pestilence as that would probably be fun to see this version brought to life on the big screen! Joaquin GR does a great job with his art duties in the pages featuring Pestilence in my view and I hope he’ll be around in the future to help bring this crazy fella to life once more! 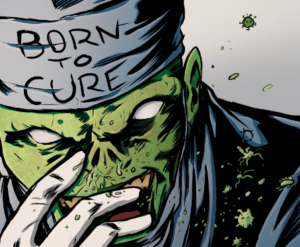 One thing is clear about ol’ Pestilence, and that’s that he doesn’t sugar coat things at all! Which is probably better to deal with from a being like him then to have one act like he or she is your friend when they really aren’t. And how he handles Prescott in here is a lot better then how Famine handled that poor woman. Even if it was rather public in how Pestilence handled him. Not to mention how he basically gives the crowd and those watching a few things he probably considers as home truths. How folks will handle that in the aftermath is anyone’s guess aside from Frank himself! I love the depths of Humanity that Frank explores in Modern Testament. Showing that for every bit of Sunshine out there, there’s always the darkness lurking about, just waiting to come out at the right moment and drag an unsuspecting individual into its hands. And whatever happens next in the series, is something I am seriously looking forward to seeing. So don’t sit on the fence with this series, as you just might regret it if you’re the type who likes seeing the darker depths of humanity be explored!

Editor’s Note: Head to the Insane Comics store to immerse yourself in Frank Martin’s world of the Ethereal in either print or digital form! And perhaps catch up if you haven’t yet!

Summary: Biblical beings, although ancient and iconic, struggle to be understood and find their place in today’s society. Humanity has changed since their creation during the days of antiquity, and they along with it. These tales chronicle them on their journey of self-worth and purpose. They’re stories of discovery we’re currently writing everyday in our very own Modern Testament.