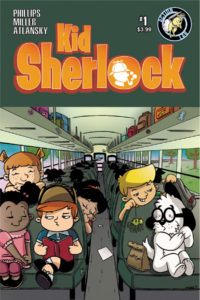 There are things in this world that make it a better place just because it exists and this my friends is one of them! While it screams shades of Mr. Peabody & Sherman in many respects this youthful imagining of the iconic pair is up there for me as one of the greatest incarnations I’ve yet to see and that includes Cumberbatch and Freeman (whom I must say I adore beyond reason). There’s this originality here to mix with the awe and wonder of these children playing detective. Okay so one’s a canine who talks it’s fantasy after all and it’s okay by me and it serves as a much better way of showing how unfair life and children can be at times.

All-ages books are completely underrated in my opinion. I mean sure they are great for the young ones just learning to read and getting them into the medium. They have subtle and overt lessons that can be learned from them and not just by the young, they serve as that reminder to those of us whom are older that the way we treat others is something we need to continually look at. Just because Watson is different doesn’t mean he should be treated differently does it? Also there’s something to be said for the childlike innocence of youth and their behaviour. It’s endearing and beyond what we remember and sometimes that eye is one we should look for again.

Love the all-ages interior artwork here! The use of page layouts through angles, perspective and backgrounds really do help the flow of the story. The kids faces and how they come to life with their expressions are priceless. The little imperfections that make up Sherlock and Watson are incredibly delightful and play off one another with the kind of ease and simplicity that is hard to come by. There’s also some little touches here that make my day like his bubble pipe.

I love that Sherlock thinks he’s a smartie pants and while he is it’s not a trait that endears him to others. That Watson, the new kid in school, befriends him unexpectedly forming that kind of relationship that they both need is wonderfully done. The use of characters from throughout the books as we see them here are creative and lend this great air of familiarity for those in the know. This is and isn’t tongue in cheek humour and it’s as fine of work as you’re going to see. 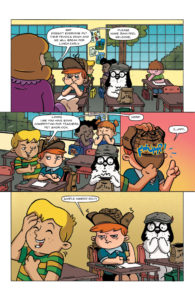 Summary: John Watson doesn’t feel like he really fits in as the new student at Baker Elementary. If it wasn’t bad enough being the only dog, it seems he has already gained the attention of the class bully, Kyle. Out in the play yard, Watson feels even more alone until he meets a young boy named Sherlock Holmes. While quite clever, Sherlock is often so lost in his own thoughts that he is oblivious to the people around him. However, when Watson shows an interest in Sherlock’s work it sparks the beginning of an adventure Sherlock never expected: friendship. Their first mission, identify the bad smell that has been afflicting their classroom.