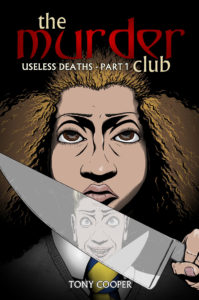 One of the greatest features of the 21st century is the ability of unknown creators to reach a crowd not previously accessible. Facebook, Twitter, Instagram, etc. have made the promotional side of the business for those not fortunate enough to land big publishing deals (or even small ones) much more efficient and easier to handle DIY style. But it’s entities like Kickstarter or GoFundMe that have helped give a tangible product for these artists’ creations. Such is the case for The Murder Club: Useless Deaths, Tony Cooper’s follow-up title to his “Some Kind Of Hero” series.

The plot of The Murder Club is deceptively, if not morbidly, simple: a high school kid commits suicide which leads two other students to speculate what it would take to get another student to commit suicide and simultaneously frame yet another student for that murder. I use the term deceptive because, while the premise of TMC might sound like the plot of a bad YA Netflix series, there’s more substance lurking beneath it than one might think. Cooper doesn’t shy away from very frank scenes of kids talking very frankly about killing other kids; and while, at times, the comic can come off as something akin to murder porn, he injects a very deep and important philosophical element into their conversations. Agree or disagree, TMC asks some questions that are worthy exercises in any philosophical debate dealing with death and the value of a life. 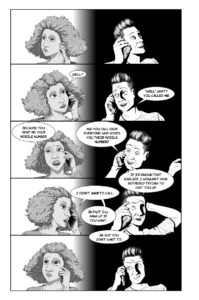 Cooper’s protagonists (used here to simply imply the main characters), high schoolers Tom and Lisa are not very likeable characters, especially Tom. This can, generally speaking, easily doom a comic book or graphic novel. But in TMC’s case, it works fine. The two and their method of discussion is reminiscient of books like Plato’s Crito or David Hume’s Dialogues where two (or more) personalities pick apart the tenets of a particular philosophy through conversation that reads like a play. Tom challenges Lisa’s ideas of death and murder, from likening a person who has died to a chocolate muffin (once eaten it’s gone but you appreciate that it was once there to enjoy) to wondering if one should take the opportunity, if presented, to make someone’s death have meaning. Tough questions to ponder aloud in any society but doubly, nay, triply so in the current state of affairs. Even completely, purely theoretical talk about topics like murder will often raise eyebrows. So, by removing Tom and Lisa’s “likeability” or “humanity,” if you will, and portraying them as neutral proxies (Tom the devil’s advocate; Lisa the straight man, err, woman) Cooper allows for the reader to more freely consider and safely engage in the theoretical importance of the questions being asked as opposed to worrying about the possibly societal consequences of out loud thinking. Having said that, I still wouldn’t have minded for a little more character depth, especially for Lisa, who seems to simply serve as the foil; the Dana Scully to Tom’s Fox Mulder.

As for the art, the black and white style found in TMC is serviceable. Probably Cooper chose this route due to costs than for any aesthetic reason. It’s sparse and clean, at least, which is something many other comics can’t claim. But the art is not what’s important here, not where the bigger picture is concerned. It’s the story. Well, the philosophical detective work underneath the story anyway. The same goes for the dialogue. Tom woodenly spouts off many philosophical ideas and concepts that seem as if they were directly copied from a book on the subject. It’s a very “un-teen” like way for teenagers to converse, but then again the same could be said for 90% of all comics that feature teenagers. 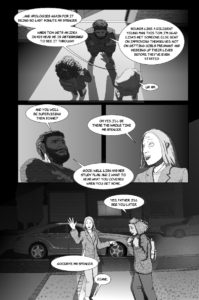 With a little work TMC would feel right at home with a publisher such as Image. There might be other no-holds-barred publishers out there who wouldn’t shy away from the content here but I can’t name any off the top of my head. And, alas, while that may not happen for Cooper this go round, it might eventually if he keeps up with the progressive story ideas and other unturned stones of comicdom. If TMC were to gain any noteworthy notoriety I could see it getting pegged as an influence in teenage circles (ala 13 Reasons Why) but that doesn’t mean the content isn’t worthy of examination and have a meaningful place in conversations about the subjects of life, death and murder.

So, if you can spare a dime (actually $6 bucks for a digital copy/$10 for a physical one) and you’re into comics that strive to be more than straight-forward tales of superheroes or zombies and dares to ask riskier things of their readers, then The Murder Club is definitely worth your donation.

Summary: Lisa, a student preparing for her A-levels, is recruited by fellow student Tom, who wants to see if they can use their combined intelligence to frame someone for murder. But is she working with him, or being manipulated into a situation that even she can’t figure her way out of?