What if? What if a rocket/satellite/probe that was sent out to 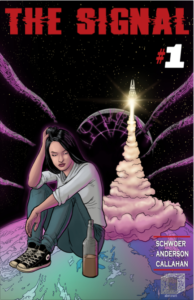 gather information five years ago suddenly returned? Based on the concept of we’re not alone and with a message that comes from said probe Kevin brings us a not so science fiction based thriller. It’s a great premise and one that isn’t so far fetched or outside the realm of what we could see happening. So buckle up and get ready for a story that could come from today’s Headlines as easily as it could from the SyFy channel.

So what I like about this aside from the premise naturally is that this is really a story driven tale. It relies heavily on the characters and their characterisation to understand who they are, how passionate they are and where they fit into the story. So far the structure of what we are seeing is very well done. I’m not familiar with anything Kevin may have written before and I believe this is his first comic so for that I’m kind of impressed.

The book kind of has three openings. One where we see the ship and where it is currently, one where we see a guy sending an encrypted email to someone before being silenced and then the woman who will start in this drama. Each one leads nicely to the other and all are tied together nicely and each one draws you further into the story. I mean it doesn’t take a leap of faith to understand why we see a death so early on and to know that the upper echelon of those secret government organisations that we aren’t supposed to know about don’t want this knowledge getting out. It’s kind of standard fare for something along these lines. It will however be interesting to see how Kevin handles their depiction and subsequent discovery by people, because we all know in this situation that has to happen. 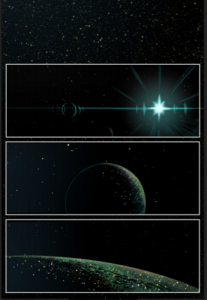 Also after trying to look around I couldn’t find anything on Neil either and I have to say I’m kind of surprised. He’s a very talented artist and I really the work he puts into this. He’s got some great attention to detail here. His eye for storytelling is strong and the way he utilizes page layouts through angles is nice to see. When he uses backgrounds they are great in fleshing out the scene so I’d love to see them used more throughout the entire issue but baby steps when first starting out. Also be a little more careful when colouring here Sean because there are times that no backgrounds means that the desk and carpets are too close in shade. You want to make sure that you are colour separating more.

As far as first issue goes I’ve seen better and I’ve seen worse and it’s a pretty solid start. We get to know Annie and a little bit of her situation. We see a plethora of outside characters that help us put the pieces of the puzzle together. We get to meet her old boss at NASA and see what role they play in all this. Plus we get to see something of how and why people are being silenced for what they know.

I’m hoping that this will be a six issue story because that’s the vibe i’m getting from the pacing so far. This is a good solid offering and once reminds me why I love these self published books so much. From a interesting solid premise with some nice execution comes a story that could be either a movie of the week or ripped from the headlines.

Here’s where you can get a copy for yourself and check out what these guys are all about! THE SIGNAL #1

Summary: Annie Archaya is a disgraced, former NASA astronomical data analyst who discovers a signal from deep space. Only, the message isn’t from an alien civilization…it’s from a human. Her search for the truth launches her on a journey of self-discovery full of alien conspiracies, government cover-ups, and answers that span the cosmos. Posing the question, are we alone in the universe?