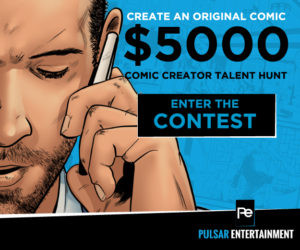 Boston, MA: Pulsar Entertainment has launched a comic book contest searching for top creators to join its creative community. Founded by the finalists of a comic contest held by Stan Lee and MTV for Stan’s original story, The Seekers, Pulsar’s goal is to launch a comic library fueled by an online community enabling joint development of new creator-owned comic book properties.

The contest prizes consist of $5,000 awarded to the winning creator and a 1 on 1 sit down with one of the celebrity judges. But, Pulsar isn’t gathering stories just for fun; its larger goal involves establishing the world’s largest independently sourced library of comics.

Comic creators interested in competing should take the following steps to submit their comics:

Creators can read the full contest details and readers can register to vote on www.Pulsar-Entertainment.com and cast their votes in support of key projects.

“It’s all about bringing together the comic book community in a way that hasn’t been done before, and giving talented creators the opportunity to showcase their work.” said Willow Polson, CoFounder at Pulsar.

Pulsar isn’t just a bunch of fanboys and girls creating fan fiction in their parents’ basement; this is a true startup backed by seasoned veterans of fiction who’ve shown support for the project, such as comics writers RD Hall (NBC’s Heroes webcomic) and Louise Simonson (X-Men’s Apocalypse, Superman: Man of Steel, Power Pack).

“Our goal in supporting the venture is to kick start the creative process and entice our peers to participate.” commented CoFounder RD Hall.

Following the official launch of Pulsar Entertainment in May and the announcement of the winning creators from the contest, creators will get full access to the Pulsar platform.

Distribution will be free on the Pulsar library and creators maintain 100% ownership of their intellectual property.

In the independent comics arena, companies like Image Comics have seen great success in launching creator-owned material. “Stories like The Walking Dead, Saga, or Outcast might have never been greenlit by traditional publishers,” said J Allen, GM Pulsar Entertainment.“We want to allow creators to be able to fully express themselves while lowering the barriers to entry in the comic industry.”

Pulsar Entertainment creators within the community leverage each other’s fanbases and talents to collaboratively build profitable titles while continuing to provide excellent stories to readers across the world.

Founded by the finalists of a comic contest held by Stan Lee and MTV for Stan’s original story, The Seekers. Pulsar is now a webcomics company focused on offering collaboration, monetization, and digital distribution tools for independent creators.