In the world of the Indies, there are many who want to draw and write worlds people like you and I have never seen before. Along with the colorists who love to help bring a little color into these amazing worlds that the writers put so much time into thinking up that they wanted to share. And then, there are those in the world of the Indies who want to do more then just that. Such as Peter Simeti of Alterna Comics, who is out to bring Comics back to the newsstands and magazine racks with the Alterna Newsprint. And recently, I had the chance to talk with him about that very goal of his!

1. Hi there and welcome to the Mind Meld here at IndieComiX! Now for those who might not know of you, could you tell us a bit about yourself and what it is you do in the world of comics?

My name is Peter Simeti and I am an artist, writer, letterer, and also the founder and publisher of Alterna Comics.

2. Rumor has it that Alterna’s gotten into the fun world of Newsprint, how true would that be?
That would be very true! On May 3rd the first wave of comics will be on local comic shop shelves.
3. Is every title in Alterna’s catalogue being included in this new venture?
No, but our first year will see roughly 12 titles in newsprint.

4. What 12 titles can we expect to see in Newsprint?
Adam Wreck, Amazing Age, Croak, Lilith Dark, The Chair, Mother Russia,
Scimshaw, Trespasser, The Wicked Righteous, Mr. Crypt, Moon
Girl, and Doppelganger. And those are just the titles that are debuting this year. We’ve got more lined up for 2018.
5. What led to you wanting to go in the direction of Newsprint?
Because comics in newsprint ARE comics. It hasn’t been that way in years but it was that way for all of us growing up as kids and for nearly 70 years. Premium paper stocks are great, they really are, but there’s something so inherently “comic book” about newsprint interiors between glossy covers.
6. I’ve seen that Adam Wreck is making something of a come back. Is this an all new title continuing after the original story? Or simply a reprint for the Newsprint route?
Adam Wreck had a short and quickly sold out run as a graphic novel and since then, Michael Bracco’s been working on a sequel for it in between his work on The Creators. The graphic novel is hard to find at this point, outside of the digital version, so we figured it’d be best to put this out as single issues and at a cover price that’s super affordable, it makes it a perfect read for kids. Hopefully off the success of this first mini-series, we’ll get to put that sequel out as well. 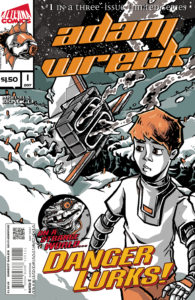 7. As a huge fan of the original Adam Wreck story, I really hope the mini-series is a huge success to gain a sequel. How difficult has it been in getting retailers to agree to the Newsprint idea?

Retailers AND readers have been loving it. The comics that are releasing in May have all sold out at the publisher level and so far it looks like we might be on pace to do the same thing for June’s releases as well.

8. Are there plans for it to not only be in comic stores, but everyday convenience stores, Wal-Marts, Grocery stores, and other places that has a news/magazine rack?

Yes. We’ve struck a deal with PDG which will be distributing to select newsstands, specialty stores, convenience stores, etc. across the world. It’d be great to see the comics do well in this market as well. Hopefully we’ll have some good news to report once the newsstand editions hit shelves in July.

9. The Chair is one of many titles Alterna has, and has also been adapted for a movie adaptation, how’s the response been for that since its release?

The response for the film has been overwhelmingly positive. It’s a dark and disturbing film with some really heavy themes to it, so it’s not going to be for everyone, but horror fans have loved it and we’ve been getting a lot of great reviews for it. The film’s currently touring festivals and conventions right now, with the next screenings taking place at Phoenix Comic Con and at the Triple Six Horror Fest in Manchester, England. People can visit thechairhorror.com for more information and to see a trailer.

10. Sounds absolutely fantastic! Would be nice to be able to buy a comic book on a Newsstand/Magazine rack again like in the old days. When an Alterna title ends up getting sold out, how much joy does that end up filling you with?

really happy for the creators here. These guys are all telling great stories and a sold out title means that people are looking forward to a book and enjoying a book. It’s awesome to see.

11. With the clear success of ‘The Chair’ in movie form, what Alterna title could we possibly see next on the big screen?

12. Where do you personally hope to see the Newsprint at in terms of success within a year’s time?
If people are enjoying the comics and we’re still making them in a year’s time, then I’ll feel thrilled about it. I’ve got some reasonable expectations here. Right now I’m focusing on April Previews/June releases and making sure we’ve got everything good to go.

13. If there was anything you could go back and do over
again, would you do so? And why?
Nope. No regrets!

14. And as for my final question, what advice do you have for those just starting out or looking to get into the Comics Industry? 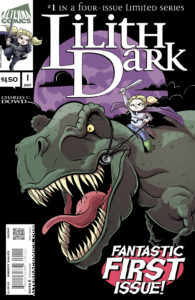 Be prepared to put in the time and the work — and even then, it’s not a guaranteed formula for success — so make sure you’re doing this because you couldn’t picture yourself doing anything else with your life.

Excellent! Thank you for your time Peter and good luck on all things Alterna!
← Previous Post
Next Post →