The world of international comics keeps getting smaller and 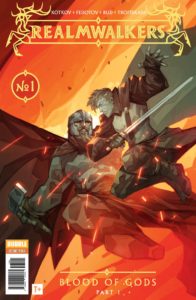 smaller as new companies such as Bubble bring us the translated Russian comic and I have to say I’m incredibly thankful. I found this to be incredibly fun, original and interesting in that it feels like a blend of the Pantheons of Gods mixed with a modern day real life Dungeons & Dragons setting. The characters possess powers or weaponry that is enchanted and must travel from world to world protecting the unsuspecting populaces from destruction so yeah it’s very much that amalgam of different genres that create a new one that is utterly and inherently fascinating.

I like this as far as introductions go since we open up in the midst of a mission and then get a flashback to Eden and a conversation between Andrey and the realm’s ruler. It does a nice job to clarify a few things that we should know about while reading this and helps us to understand him better. Andrey doesn’t want to be a hero and I like that about him but he’s being thrust into this role regardless and there are consequences that a man like him will do his utmost to keep from happening. So the inner conflict is real and I like how strong the characterisation is.

interiors are nice they have this kind of animated feel to them while still remaining true to what we think of as comic book art. There’s some nice attention to detail here and the imagination and creativity we see on display is wonderfully presented. The use of page layouts through their angles and perspective are utilized nicely. While I personally would like to see more backgrounds what we get here is used judiciously. There’s a nice sense of emotion and feeling that comes from the work.

I’m more than a little intrigued as this trio scours the multiverse for those divine who wish to pay an Earth a visit and must stop them in their pursuit. It’s different, well thought out and executed so as to be familiar and yet completely new and unique. Also the main characters have three vastly different personalities and that should make for some interesting reading as the series progresses.

Love finding companies and books like this it keeps the fires of imagination burning brightly!

Editor’s Note: Got the urge to check this out for yourself? Head right here!

Summary: First of all, our Earth is just a part of the Collar of Worlds that consists of many parallel worlds. And, second of all, the gods that you read about in myths and legends actually exist. And any world that they visit will be destroyed in an apocalypse! But don’t worry: there are heroes that will not let that happen. The universe is protected by the Realmwalkers – the mighty warrior of the ancient lineage Andrey Radov and his wife Kseniya that can control plants and their friend – the former Ivan Tsarevich who transformed into the Grey Wolf. Whenever one of the Earths gets a divine intervention, our trio immediately races to help! And their coordinators in this journey are the deathless ruler of Eden Koschei and Vasilisa the Wisest that observe the Collar from the edge of the Universe.