Okay, so despite what I knew about this book after Kevin Chil

coat sent it to me, I am still very unsure of what’s real and what’s not by the end of this. Which really doesn’t happen that often for me when it comes to comic books. So nice work there for making me feel that way Kevin! Marc Olivent’s colors for the art really fit the tone of the book since Alistair is definitely in a pretty messed up situation while stuck in a mental asylum. Not to mention thinking he’s living another life in a medieval fantasy world. And you have to make sure you’re paying close attention to what’s going on or you might get lost and confused as present and past tend to switch pretty quickly without any warning. And with what the Doctors had been doing to him around the beginning of this story, it makes you feel a little uncomfortable with the thought of your own mind being screwed with like that just to provide better behavior and the like. Results that also cause amnesia unfortunately. Which is some scary crap right there! Though whether or not the amnesia is actually because of the treatments or something else that caused it truly remains to be seen. 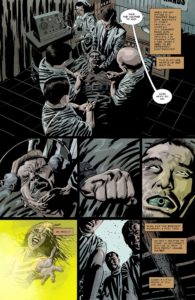 And hopefully, if Kevin does end up continuing this, we’ll be able to learn for sure about whether or not what the deal is on that. While things are looking pretty bleak for Alistair in one world, it also seems to be like that in another. At least at first since he’s all chained up and what not just for saying ‘no’ to a King’s request and all. Which is ridiculous and a complete misuse of power for crying out loud! But at least the King seems kind of like a nice guy despite some of his reasons for doing things. I’m curious though about Alistair’s decision in the end after the King’s big speech and information giving involving his kidnapped daughter. If whether or not he’s just saying yes to avoid being thrown back into a dungeon or worse. Or if he’s simply just going along with things cause its better then the alternative. Not that I could blame him of course because the alternative sucks! And while there are so many things about this book that leaves you with a lot of questions, I think its safe to say that the surprise appearance of one fella and what happens after that is quite possibly the best part of this whole comic! Even if it does leave on something of a cliffhanger that leaves you wanting more!

So if you like a comic that gets you questioning what’s real and what’s not within its pages, this is definitely for you!

Summary: Knight in the Snake Pit is a story where the main character finds himself traveling between two worlds. One of which is a mental hospital in the late 1940’s and the other is a medieval fantasy world. In the mental hospital, he’s a patient, one false move away from a lobotomy and in the fantasy world, he’s bring sought after by a king to help save his kingdom from certain defeat.