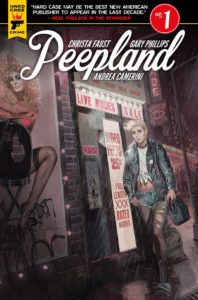 Peepland is the kind of story you wanna experience while listening to Disco house music. I know because that’s what I was doing while reading it, though the era for this comic fits squarely in the age of Rock’n Roll the funk is still alive and well, plus it makes good running music during the chase sequence.

Regardless, this was a fun opening issue set within an age where things were sleezier and grown up, where drugs and Rock’n Roll reigned supreme, and as this story focuses a bit more, the showrooms were at the height of their power. Roxy, our main girl, works for a live nude room called Peepland, thus the title of the comic. However instead of being presented as a dolled up, sex loving gal she exists more on the normal side with a skinny frame but personality and style that is something you’re more likely to see in the real world.

She’s a rebel who accommodates the sleezebags that come into her booth and onto the glass the separates them because she needs the money not because she enjoys it. In fact one thing this comic does a really good job with is presenting all of these showgirls as regular people. In fact one of the subplots introduced in this issue is that of a budding relationship between one of the girls and a butch lesbian who routinely visits the room, but it’s not done in a pandering way in the slightest. It’s actually quite cute and I’m interested to see where it goes.

However the main feature of this story centers around a man named Dirty Dick, a pornographer who makes smut films and films where he gets girls on the streets to take their clothes off for him. Most of his time in this issue features Dick running from a couple of thugs trying to get a VHS from him as he hides it in Roxy’s booth. Later on however he gets cornered by the goons and accidentally goes flying into a train and killed.

Roxy eventually finds out and ta

kes the tape Dick left with her home where she gets advice from her uncle, whom I’m quite sure is suffering from late stage AIDS, to get rid of the tape. Obviously she doesn’t and drags her ex-boyfriend into the mix by forcing him to watch the tape with her.

The issue ends on a cliffhanger where we find out Dirty Dick caught a murder on tape. One that, from the sounds of the synopsis, will have major repercussions for our unlikely heroes to come. I’m very excited to see where this story goes. Also, there is some light nudity in the issue but is tasteful and not meant to exist in a sexual or arousing way. Ironically, given the setting.

Camerini’s art is undeniably gorgeous capturing the feel of 1986 New York accurately – or as someone who wasn’t alive in 1986, I presume is accurate. Regardless, I love Camerini’s art and how everything from our characters, their movements and just the overall atmosphere of the world in which they inhabit simply feels natural and fluid moving. Nothing feels static. In Peepland the world is alive and if just for the art alone I’m very excited to see what comes next.
Final Score: 5 Showgirls Performing Live out of 5