Well now, perhaps I should have taken heed to the clear w 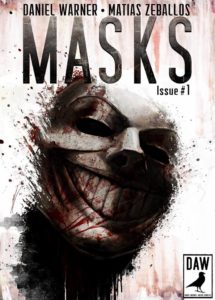 arning the cover of this title clearly gave! As wowzers! I honestly felt a little creeped out by the Bookkeeper (the main character) all through my read of this first issue. Mostly thanks to the mask he has on through out the whole thing. Causing me to wonder how the heck he found that thing to begin with! And as his name suggests, he’s a keeper of books and he’s looking for one book in particular! One that could apparently change a whole lot of things for that matter! And the world our fair (or not so fair) Bookkeeper lives in has pretty much gone to pot. Mostly thanks to the issues that sprang up between Maskless people and Masked people. Which now for whatever reason, makes me think of Masked an

d Un-Masked Wrestlers having serious issues with one another for a story. Although, maybe not to the lengths this story took things. Such as practically reverting to an Old West feel for example. Which is kinda neat cause you see horses pulling cars instead of carriages. And as far as I can remember, that’s the first time that I think I’ve ever seen anything like that being done.

Matias really did a great job with the art, letters, and colors here. The colors you see through out the book really do fit pretty well with the setting of the Old West feel that’s going on here in the wake of the Mask/Maskless situation that occurred decades ago and changed everything. For good or worse however is something that’s clearly up for debate! Though I personally lean towards worse! Daniel’s writing is pretty solid, though you may need to do more then one read through of this to understand everything entirely since you might miss something in the first read through. Especially when things get closer to the end and goes a bit topsy turvy with a few of the characters ol’ Bookkeeper meets. Who seems to be out to prevent certain bits of information from reaching the general public. Leaving me with questions about the guy and if whether or not he’s the original Mask who pretty much started things. Or if perhaps he’s just someone who was close to the guy and doesn’t want what he started to end. Thanks for that bit of mystery and wonderment Daniel! Another thing I am pretty curious about, is why exactly does those who don the Masks tend to change up how they act and become violent?

Its something that’s pretty much left unexplained for the most part. Though I might be wrong and could have missed that for all I know. But hey, who doesn’t enjoy a good mystery right!? But while Bookkeeper handles business in the little town he finds himself in, its clear he still has his work cut out for him since a pair of folks are one step ahead of him in spreading things he’d rather not be spread. How that works out and how they even learned of it to begin with are things I look forward to finding out about. Along with how masks manage to change people and if whether or not the man who started it had something to do with it on some unknown level from behind the scenes. I definitely recommend this to anyone who likes a little mystery and a little creepyness mixed in.

Summary: In 1965, an unexplained phenomenon divided the people into. Maskless – honest and direct, what you see is what you get, and Masks – shady and never trustworthy, never what they seem to appear. The ensuing conflicts brought the world down to rubble in a matter of decades.

A century later, in 2066, a Bookkeeper roams the desert that used to be called California, looking for a book that is said to get rid of Masks, to bring peace and balance to the world. Only can it? Can anyone? To answer these questions, the Bookkeeper has to find the book. And so, the journey begins.