Review: Issue #2 continues the new Action Man’s quest for vengeance as he goes off protocol during an assignment to ambush a bunch of terrorists that are holding some bystanders hostage. What I enjoy about this new Action Man is that he is flawed in the sense that he just wants to get revenge for his fallen hero and can’t accept that the villain who did the job is dead. It drives him to make rash decisions during sensitive missions which causes for interesting and natural conflict between other characters later.

As far getting the job done physically, this new Action Man is still pretty much perfect. He gets those hostages out of there with none of them shot or hurt. He himself takes a wound but not a life-threatening one. Later, though he was doing the right thing, we see Ian getting reprimanded by the Director Pauline Bestley who’s more or less had enough of his crap. I’m pretty sure she only keeps him around at this point because he still gets the job done.

Majority of the issue the action scene at the beginning, followed by a fight between Ian and Agent Terrance Salmons, one of his back-up operatives that is bitter because he wasn’t chosen to be the new Action Man. The two have a lot of animosity towards one another over this, most of it coming from Salmons.

Ian is put under house arrest for a night but after getting a lead to someone who may be working for the presumed dead Doctor X he sneaks off base to find the man. He does and finds out quite a bit of information before entering into a fight with the masked man. Doctor X is in fact still alive, he’s invited the masked man – whose name is Colditz – to a place called the Chateau. And finally that there’s a traitor within the Action Man program.

There’s not much to think about Colditz right now. The fight ends with him seemingly dying, I’m not sure if he really is dead or not, but while he had I guess a neat design it looked very outdated to me. Like early 00s edgy and I didn’t really enjoy that. And while I appreciate Barber not beating around the bush when it comes to giving us small details now to chew on, it may have been wiser to wait one more issue to give the reveal of Doctor X and the traitor.

Mostly because I like what comes from Ian being so convinced that his hero’s arch-nemesis is still alive and everyone else being wrong. The fight ends and Salmons shows up almost too soon after the fight. I’m sure this is foreshadowing to tell us he’s the traitor, or perhaps it’s to give us that impression while making it someone else later, but I don’t think Salmons is the traitor. I think he really looked up to Action Man and is truly distraught over not getting chosen to be his successor. Thankfully we do get a reason why Salmons is there, he tracked Ian, but I do hope this foreshadowing isn’t too on the nose with him.

The art is just as good as it was last issue. I am really coming around to Villanelli’s style. It really fits this action-packed, Saturday morning cartoon vibe this series gives off. I really hope he stays on the book for a long time. His action is very kinetic, but his quiet moments are just as great to look.

There’s also a nice little story at the back written by Barber with art by Fico Ossio that gives us a bit of backstory on several of the characters that will be important to the upcoming Revolution event. Art for that is also great, and I really found the history lesson to be helpful as someone new to this new overarching Hasbro-verse (I’m familiar with all the franchises, just not their histories crossover with one another in recent years).

Action Man is a really solid series right now. I can’t wait to check out issue #3.

Final Score: 4x Ian Didn’t Follow the Rules out of 5

Summary: ACTION MAN IS DEAD—LONG LIVE ACTION MAN! He’s the world’s greatest special agent… until he dies saving the planet, with all the world’s eyes on him. Now his young protégé has to step into the role—whether he’s ready or not! 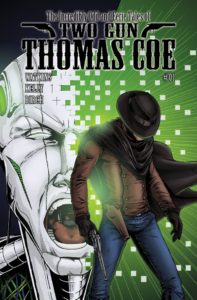 This is not your Atypical Western no sirree bob. I love a good genre mashup and Eric delivers just that here. Thomas is a cowboy alright but his partner is a robot and he does his fair share of traveling through dimensions, time or alternate dimensions and he’s facing men in armour with lasers and riding dinosaurs. Oh yeah it’s good stuff right off the bat.

Now Eric doesn’t explain why this is his life and i’m good with that. Because what we get this issue is pretty just an introduction to his life and what he’s up against. The explanations can come later as the series progresses. After all what a good book needs is to grab the reader’s attention and make you wonder just what the heck is going on.

Tristan does a nice job on the interiors here. I enjoy a good black and white interiors as it gives us a chance to really see the line work here. His rendition of the dinosaurs and Thomas’ outfit work extremely well in this style. Nothing is lost in the colouring process so you see the attention to detail here. His use of page layouts through angles, perspective and backgrounds really help control the flow of the story nicely. The kids got good instincts and his work is fluid and well done. As he does more work I can see him really becoming someone who will have a good impact in the industry.

Thomas’ companion is Boom and he’s in charge of shifting them from one place to another, which usually gets them out of a hairy situation. Or one where it looks like they are gonna lose, see die or get eaten. While Boom seems to have something of an artificial intelligence to him he speaks very much in terms and ways that showcase he’s indeed not human. The dialogue between Boom and Thomas is fantastic and gives a great look at each them and how they work as a team.

So where and when do Thomas and Boom come from, why are the shunting around to various realities? We might not be given any answers yet or heck even any clues but ya know what it’s an original way to start off a series. I’m left with so many questions and an appreciation for these two individuals and a desire to learn more. The premise is interesting and the way the pacing of this story has been done is great.

Once again Broken Icon has delivered another series that has what it takes to stand out in the crowd. Small Press/Indie companies like this are the reason my love of comics keeps growing and the amount of fun and love these creators put into their work is infectious. So head on over to www.brokeniconcomics.com and see how to get yours today. I mean c’mon who doesn’t love Cowboys, Robots and Dinosaurs!