I’m a huge fan of these stories. The work the Thomas’ did o 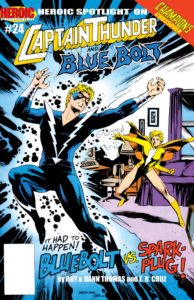 utside DC and Marvel doesn’t get the attention or credit it deserves. At the time this was cutting edge comics storytelling, not hampered by corporate mandates they were able to tell stories that delved deeper into the characters than anyone else was doing at the time.

Not only that but the interior artwork here makes me miss this era. So incredibly detailed, the use of backgrounds is astonishing and just the way page layouts were done through angles and perspective were flawless. Not to mention how good the faces are here and how much attention went into every detail you see on them and the page.

If you read this you’ll see it stands the test of time. It’s just as good, strong and interesting for today as it was when it debuted. You’ll also see this kind of storytelling being commonplace in comics where it’s really very story and character driven work. The depth that the Thomas’ get from their characters here whether they be villains who open up the book or father and son alone in the woods it’s so good that you will forget this isn’t brand new.

There’s a great opening page telling the story so far so when, not if but when, you read this you’ll get caught up on Captain Thunder and Bluebolt’s story. I do like the opening here with the King’s Gambit and his chess themed court at his command. It evokes the thought that this story will be told like a chess match, one move here one there using pawns to begin then bringing out the stronger pieces. It’s the kind of layered story that makes things interesting since you don’t know which is going to be which or when it’s going to happen and that’s the gripping fun of this adversarial gambit.

Sparkplug is a member of the Champions, another Heroic series, and this is her introduction to the pair. They all share similar powers and what she’s doing here well I found that rather risque even now. I mean we all know that women go for what they want and have various means of doing so, from subtle to outright. Still seeing her in action alongside the boys as if she’s a part of the family and enjoys them trying to shake her off well it adds that fun and levity element to a heavy story.

After a particularly bad experience and some time in contemplation in the woods the boys come home to find themselves thrust into something new and being used from all directions. With the help of Sparkplug can they turn the tide and free themselves from the predicament they finds themselves in? Keep reading, it’s the only way to find out. 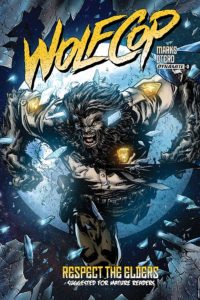 And then came the tentacle porn! Or as close as one can get anyway in this issue! And I have to say, this was quite the interesting issue as not only does it answer a question I’ve had on my mind since the beginning, but also that we see fan favorite Tina back in action! It makes sense that she would stick around in Woodhaven as someone’s gotta Sheriff the place! Though it certainly seems like a lot of wild action’s been happening since ol’ Lou left town. The Toll Booth scene at the beginning is something I honestly found a bit amusing and I’m kinda hoping we see that and the two chatterboxes that work there again in the future. Especially if they have more stuff to talk about related to the events that have happened. Not to mention any other reactions they might have to Lou! Admittedly, I was honestly confused by the appearance of one particular character due to the events of the previous issue. But it was nice to know he didn’t suffer a permanent fate!

But it makes me wonder about ol’ Willie. As he honestly seemed like a bad guy there towards the end in the film and the fact he’s more pro-active in helping out Lou here makes me want to know what happened for Willie to re-gain Lou’s trust following the events of the film. Especially since he had been shown to bite the big one on there. Guess the guy has a 9 lives kinda thing going on! But his being alive and Tina showing up thankfully answered a question of mine like I mentioned earlier when it comes to where this comic takes place in the timeline of the film’s events. And nicely enough, it takes place after the film and the consequences from that are in fine form here with all the trouble we see Lou end up in once he first gets to the area. There’s a subtleness to all this that Max Marks does really well with. Especially where consequences are concerned from past actions! Like Lou being stuck in his Wolf form apparently following the second issue.

How he gets past that is anyone’s guess but I look forward to seeing how it happens! Alan Otero, Arcana Studio, and Chris Barrett in addition to Max Marks continues to keep doing an amazing job with this adapation of the film and I honestly hope they continue to be part of what Max is doing for however long this title goes on. Which is hopefully a good long while as I would love to see what all Lou and Willie get up too! Heck, maybe a few Tina centered issues thrown in for good measure as well. Though I wonder how much help she’s got while all the chaos is going on in the town, as I imagine its definitely not easy dealing with all that on your own! And as you might can tell, I loved that she had a fairly good role in this issue and wasn’t just kept in the background for a potential damsel in distress moment. She was a bad ass in her own right in the movie and she’s still a bad ass here. Even when dealing with weird looking Snipers and Elderly types!

And that guy is definitely not what he seems! He’s also quite adept when it comes to tentacles too. I’m curious as to what he needs Lou’s blood for, though I imagine it can’t be for anything good at all. I wonder though if all the Alcohol in Lou’s system made the old tentacle guy a little buzzed. As that would be a little on the hilarious side of things if it actually managed to happen somehow while he was taking a bite out of our boy Lou. And again, I love Tina in this issue, add on to the fact that Willie only aides in her bad assery takes the cake when she’s involved in things and turning a momentary blind eye to some of the more illegal things he has in his back room! There’s a moment Lou has that has me curious as he’s got a feeling going through him he’s familiar with. Its not covered too much on due to all that’s going on but I do hope its explored more in the future. And if whether or not it’ll be something that has an effect on his mental faculties as even for a WolfCop like himself, he can only handle so much before he breaks.

This was a fantastic issue all around and I look forward to seeing what happens next. Especially if anyone knew the old guy and wants to take revenge for what happened with him. Good luck on getting those doughnuts Lou! As it certainly sounds like you need a bunch of those after all that you just went through! 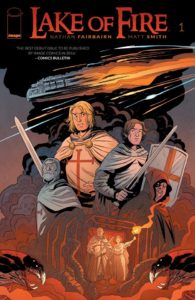 Summary: It is 1220 AD, and the gears of the Albigensian Crusade grind on. When an alien spacecraft infested with a horde of bloodthirsty predators crash-lands in the remote wilderness of the French Pyrenees, a small band of crusaders and a Cathar heretic are all that stand between God’s Kingdom and Hell on Earth.

Review: Lake of Fire does not feature a lake however it does have quite a bit of fire in it. At least at the beginning. This comic is an incredibly strong opener and very easily marriages the themes seen in Lord of the Rings to those in Alien. Majority of the issue uses its double-sized page count to introduce us to several different characters some of whom don’t even make it out of the first issue alive.

Not only are we introduced to them but we also get to learn a lot of about them in this issue as well. Taking place in the year 1220 AD during the Crusades, Lake Of Fire at first follows a few upstart Knights, Theobold of Champagne and Hugh of Blois. Technically Hugh isn’t a Knight, I believe he’s a squire. Either way, the story follows these two fellows at first, young adventurers who plan to join a Crusade to fight for God and win glory.

These two don’t have any knowledge of what they’re actually doing however and the man running the Crusade they’re joining is firmly aware of that. He knows of their coming arrival and he’s made plans of what to do with them if they still plan on serving with him.

Thus our young intrepids get sent to a small, nearly nameless town where there is word of heretics and it’s their job to sniff them out. Inducted into their party are a few shavepates and friars, the kind who see heresy in everyone, an old knight who was once a very famous knight named Raymond, and finally Count Henry, a man working under Theobold’s mother who was sent to retrieve him from duty. Upon failing Henry has decided to become a knight himself to serve alongside his young master in this mission in order to see him home safely.

A couple of zealots, an old rigid knight, and some untrained kids are our ragtag band of heroes off to save the little town of Montaillou. What we get next is some lush scenery as they travel the countryside and a lot of gorgeous artwork from Matt Smith. This whole book is gorgeous but it’s at its most impressive during the scenery panels. Very calming to look at. Smith was a really good choice for this book.

The other major element we get in this book is horror as the book actually opens up with a spacecraft crashing to Earth. We get glimpses throughout the beginning and middle of a few alien creatures now running amok in the land. Horror is very hard to get across in comics because sense of dread can be difficult to convey.

I will say however Fairbairn does a pretty adequate job at getting the reader excited. Like the good Alien films seeing less of these creatures for majority of the issue really builds the tension. We do get to see them in full form by the end however and when that happens things turn into a bloodbath. It’s great to see that these mysterious creatures will definitely be a threat. I also really like their design.

If there’s anything I felt was wrong with the issue it would be the cliffhanger ending which feels very out of place and abrupt. It’s not a bad choice, but the book perhaps could have used another page past where it ended and we’d be good.

Lake Of Fire is a really cool comic. Adventurous, gorgeous art, vibrant colors, and a fun blend of fantasy set to a historical backdrop with sci-fi horror. You really can’t beat that and this book definitely makes that clear. Go check out Lake Of Fire.