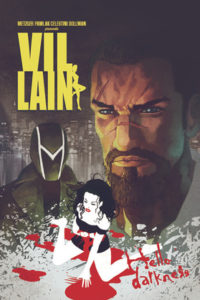 been reading from this company. There’s a real nice showcase of talent here and the story is one that I found fascinating. Not uncommon mind you but in a sense it’s got a nice slant to it and it has definitely done it’s job reeling me in and making me want to come back and see what’s next.

We open up with a look at some street girls trying to ply their trade. Overhead we see the world is populated by heroes and villains and the girls talk about this. It’s a nice different way to establish this world without focusing on the heroes. A john pulls up and picks one of the girls and very quickly we see not all villains wear outlandish outfits.

The grittiness that follows is well portrayed by both Joshua and Grzegorz here. Where the john thinks is a nice quiet out of the way spot is really too very close to where a man lives and doesn’t tolerate what’s happening. Not because he wants to save or protect the girl but because of what the man says to him do we see him wail on him. We’re left wondering who this mystery man is until a local hero Mongrel comes and identifies him for us. It’s one of his old nemesis and he’s recently been freed from jail.

So can Mr. Grimes, who just did a very good deed, keep his nose clean and lead a normal life without the temptation of resorting back to his old ways? This is a great first issue in establishing Grimes as a person and what his life is like now. After playing the accidental hero we see him go through a series of honest modern day problems an ex-con has. Peeing in front of someone to ensure it’s his. A lowlife job that pays too little but there are none else for a man like him. Also five months pass after the incident.

Then two things happen in his life that take Gil to a crossroads. One an old partner from his supervillain days shows up with a job offer. The other is Lilly Sanchez the girl whose life he saved showing up at his door not only thanking him but wanting to get to know him. Both of them with damaged lives and pasts currently on the straight and narrow. Can a new friendship lead to a relationship that will keep him honest or will the temptation to pay his bills draw him back into old habits? 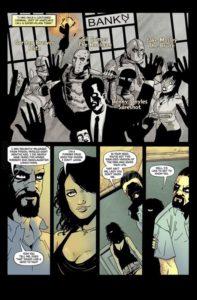 The characterization and story development are really very strong. It’s a great look at Gil and his life and at two possible futures. It’s also surprisingly relatable to anyone who has known or can imagine what a person getting out of jail has to face. There’s a brutal honesty to the thinking behind the actions and that is greatly appreciated.

The interiors show a lot of promise. You can tell that Grzegorz doesn’t have a lot of experience in interior storytelling but from what we can see is that he gets stronger throughout the issue. Foreheads that at the beginning look too elongated get tighter and the shot selection, angles and perspective, becomes better and the the flow of the story is nicely done. His overall style fits nicely with this story and very much reminds me of a contemporary Noir style.

This is only available digitally right now, hopefully that changes so I can have print copies lol, so it can be found on gumroad.com, Villain FB Page, and Tapastic and I honestly think its worth your time to check them out. It’s off to a strong start and the promise for even greater things to come is clearly evident from the creative team.

Summary: VILLAIN – crime fiction set in a super-hero universe, gritty and ironic. The story of two broken people putting themselves, and each other, back together.