Unpopular Tales I: The Lost Files. An illustrated novel 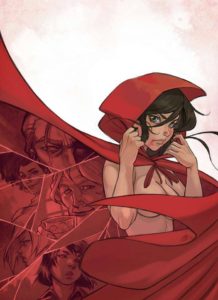 After the release of his first comic, Christian Douglas has gathered a group of 12 creators – 6 writers and 6 illustrators. Together they will release an illustrated novel for adults to explore in depth the comic’s story published in 2015

After the conclusion of the first comic, a lot of questions were left up in the air: Who was Red Riding Hood? What kind of joint does Granma really run? Who were the other girls? Who was Jack Lumber? All these questions will be answered in this novel To finance the production and distribution costs a crowdfunding campaign for Unpopular Tales Volume I. The Lost Files, has been setup and starts on October 25th. In this project Christian Douglas and 5 other writers: Drew Dewsall, Russel Nohelty, Rafael Ruiz Dávila, So Blonde, Juan José Ferres Romero and 6 illustrators: Juapi Scrawls, Samuel Hernández, Juan Alberto Hernández, Andy Lambert, Claudio Sánchez y Chuma Hi. Together they will tell the story behind the girl with the colourful hood.

The campaign will run for 40 days, from October 25th until December 5th and we’ll inform you when it is up and running.

This first illustrated novel has been planned to show female empowerment, with five women fighting with everything they have, for survival. All are in various stages of their lives but all share the common issue of a lack of a guiding figure in their lives. And as in all Unpopular Tales, there’s a lot of violence, sex and hurtful truths. With this piece, Douglas and his team answer their audiences call to expand the original story and its characters.

Editor’s Note: The Kickstarter is now live! So head on to right here to donate and help make this title a reality!