One of the things I really enjoy about reviewin 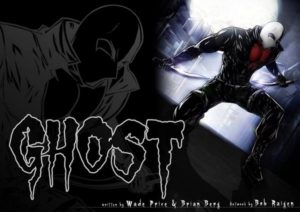 g comics is that people who have these little indie companies or self-publish have a way of finding you. I wouldn’t have heard of this otherwise, unless by some miracle I saw it at a convention, so it gives me the chance to see what else is out there. Sometimes I’m a little disappointed and other times i’m thrilled and occasionally it’s somewhere in between. Now you’re wondering where this one fits in eh?

I’ve said it before and I will again i’m art snob now two ways about it but over the years I’ve come to see how different styles can be appreciated. What I found myself really liking here was that it felt like I was watching some Anime movie. The work Bob does is charming, fun, expressive and there’s a nice amount of detail happening here. Backgrounds sometimes pop, that grafitti or newsstand, and all around it’s fun. Plus the violence is underscored to me, yes it’s there but mostly the after not the act so I get into that. Oh and thanks for that tush shot.

So for the story I gotta say the boys did a nice job here. We get a very good look at they’ve chosen to base this in. This issue concentrates on one aspect of the underbelly of Crescent City and a gang that likes to wear a modified Plague Doctor mask. I like it because we don’t really learn anything about this Ghost character. Instead it’s all told from the perspective of this gang and it’s newest initiate. So it’s more hearsay because well they wouldn’t have lived to this tale apparently but I like that since it leaves a lot open for interpretation and exploration. 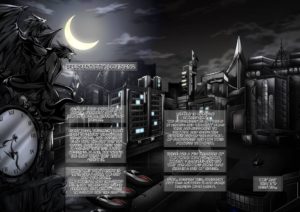 That is until the Ghost himself shows up and starts doing his thing. So city’s self-appointed protector? Avenger of the innocent? Just a bad-a$$ in a mask? Who knows and honestly at this point I’d rather not know. Just keep giving me stories that flesh out a personality and i’m good after all it did work for the Phantom Stranger for so long. There’s another character involved here too and he’s either a rival or friend of the Ghost, well friend might be pushing it but ya know. So basically we get next to nothing and it’s the best nothing there is. I like this it’s different, it’s mysterious, it’s violent and full of what if’s? Plus it makes your mind work and you think about what’s going on and that makes you want to come back again.

So I got news for ya, this is good. It’s a solid story that introduces the reader a new world ready to be explored. Enigmatic and interesting characters to follow and very much a great animated anime style interiors that really make things pop! This is why we love indie books so much, gems like this one!

You can get a copy for yourself through www.insanecomics.com so go check it out today in print or digital format!

Summary: Crescent City is a place of two worlds. One is of happiness and beauty, the other is a dark place of blood and pain. Corruption flows through the streets as gang leaders and killers make their mark in the deep south. Only one thing stands against them: an urban legend with a thirst for blood. A legend the city calls “Ghost”.