On the heels of an incredible weekend at New York Comic-Con, Scout is excited to announce its December-shipping books, which are currently available for pre-order! We are proud to debut the fantastic sci-fi story TERMINAL PROTOCOL, as well as our first batch of collected editions!! 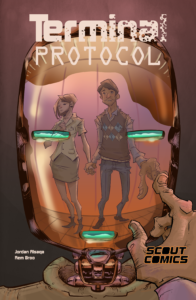 TERMINAL PROTOCOL ONE-SHOT
Written by: Jordan Alsaqa
Art by: Rem Broo
When her husband Dustin is diagnosed with a terminal illness, Dr. Katherine Talton throws herself into exploring the boundaries of robotics and artificial intelligence to try and find a way to save his life. With the end drawing near for Dustin, Katherine pushes further into untested technological realms, refusing to let go of the man she’s spent her life with. Scout’s next big book, Terminal Protocol explores how far one woman is willing to push the boundaries of science to save the person she loves. 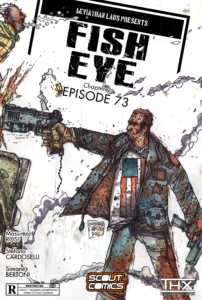 FISH EYE #2
Written by: Massimo Rosi
Art by: Stefano Cardoselli
Full Color, 32 Pages, $3.99
The show must go on! Travis isn’t ready to die and the first attempts to take him out failed… but the mad preacher, Glenn, with his loyal followers, are still trying to tear him apart, starting with his family. Even though Travis is badly wounded, he’s ready to fight back. The descent to hell of this police everyman has just begun! Join Scout Comics for a story that is a cross between THE TRUMAN SHOW and DIE HARD!

GIRRION #3
Written and drawn by: Tom Lintern
The hottest new all-ages book continues!!! GIRRION is a sweeping sci-fi fantasy story of a hero’s journey in a distant world in a distant time. News of a powerful artifact triggers what appears to be the biggest treasure hunt in Gania’s history. Jarra witnesses first-hand as treasure hunters enter the city by droves to unearth what secrets still lie below. 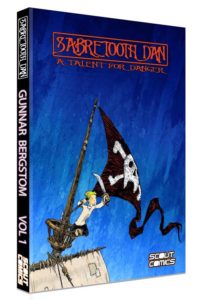 SABRETOOTH DAN — COLLECTED EDITION VOLUME 1
Written and drawn by: C.R. Mountain
Collecting SABRETOOTH DAN #1-3 plus tons of bonus features! If you crossed Calvin & Hobbes with Lord of the Rings, it’s very likely that the result would be SABRETOOTH DAN! Check out the sword and sorcery comic that stars an orphan with both sabreteeth and an over-active imagination in a LOTR-like world! But when real-world adventure comes knocking, Dan finds it impossible to say no! With breathtaking art, SABRETOOTH DAN is destined to be an all-ages hit for generations to come! 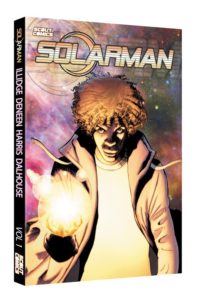 SOLARMAN — COLLECTED EDITION VOLUME 1
Written by: Joseph Illidge & Brendan Deneen
Art by: N. Steven Harris
Colors by: Andrew Dalhouse
Collecting SOLARMAN #1-3 plus tons of bonus features! Originally published by Marvel Comics and written by Stan Lee, Solarman returns after a twenty-five year hiatus! Ben Tucker is a teenage hacker going after the wealthy and corrupt, fighting bullies, and living in his father’s basement. When a mysterious alien attacks a space station conducting secret experiments, Ben is accidentally exposed to extraterrestrial technology and imbued with nuclear-based power. Now Ben Tucker is a fugitive, with the police, an alien menace, and a paramilitary division hunting him down, with the intention to capture…or kill. 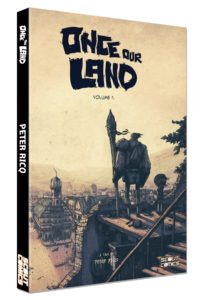 ONCE OUR LAND — COLLECTED EDITION VOLUME 1
Written and drawn by: Peter Ricq
Collecting both sold-out issues!! An amazing debut from a visionary new creator! ONCE OUR LAND is a post-apocalyptic tale set in 1830s Germany. It is the tale of two survivors, Ingrid & Fritz, as they battle each day against mysterious invaders that have surfaced and wiped out everything they once knew. A fantasy, sci-fi, period, and action story rolled into one epic package, ONCE OUR LAND is destined to be an all-ages classic!