Anybody who has ever sat through a wedding, funeral, chri 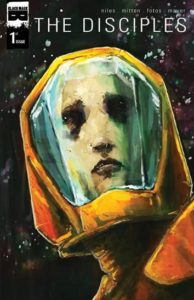 stening or even a regular Sunday service will know that even the wine can not make it any less miserable. For a long time, I thought the only way to jazz up church would be if it was in space, since everything is more fun in SPACE.

Steve Niles and Christopher Mitten disagree with this theory. They say space churches are horrifying.

Our heroes Dagmar, Jules, and Rick have been hired to bring home a teenage girl who has been whisked away by a very rich man to a very big moon populated by very insane cultists. It sounds like an easy enough job; fly around, bring a girl back, get paid.

But it turns out that things CAN get worse in space.

Issue one is a slow start to the series; most of the time is spent with the central characters making their way to the moon that houses the cult. They discuss the job and offer plenty of background on the cult leader, McCauley Richmond.

Rich people have been colonising moons in the solar system, with Richmond colonising Ganymede, one of Jupiter’s moons. This is where he puts his space church and houses all of his space cultists.

It’s a slow start, sure, but Steve Niles is a writer who knows how to build tension. An issue where most of the time is spent talking can be just as effective as any jump scare or gore scene.

The issue is peppered with Dagmar’s visions of dead people floating in space. When you add to that Christopher Mitten’s gritty, dark style the whole thing has a very creepy edge that creates a sense of dread with each page.

And it finishes in a big way, with one of the coolest, creepiest looking monsters to appear in comics in a long time. I won’t describe it, because it’s worth seeing for yourself without any prior knowledge. Go look at it.

But issue two doesn’t dive straight into the action. Instead, Niles expertly cranks up the tension and creates paranoia as the woman/thing disappears and leaves them searching for it before they’re forced to land on Ganymede.

It’s a story that gets to the point at its own pace, focusing on building the right atmosphere. There’s no rushing into any action, so when things start to get a bit hairy it feels natural and it’s very welcome.

Niles is an expert in horror and can clearly do just as well with sci-fi horror. But besides an interesting story with a great atmosphere, he also gives us characters that are likeable and worth rooting for. Dagmar, Jules and Rick are people who seem nice! They seem like people you’d get along with. So you want them to come through this thing without getting their heads blown to bits. Niles is pretty good at this stuff.

And long time collaborator Christopher Mitten provides some really high quality artwork. The dirty, gritty look he brought to Criminal Macabre when he became the regular artist is on full display here and it’s even better when it’s in space (See, most things are better in space. Not churches).

There are several pages in both issues that are there for Mitten to really show off his work; we get pages filled with vast, empty space with the ship flying through leaving a bright blue trail behind, which looks excellent against the blackness of space. We also get shots of massive planets that really do feel that big, helping to add to the sense of lonliness. These pages don’t feel forced in any way. They’re necessary for creating the sense that these people really are in space and have no way of escaping when things hit the fan.

This is a book you’ll want. It’s your thing! Trust me. Just give them your money. It’s so much better than church wine.

Editor’s Notes: Are you ready for something that’s better then Church Wine itself? Then head here if so!

Summary: Dagmar, Rick, and Jules, intrepid private eyes/bounty hunters, have been hired by a high ranking Senator to retrieve his teenage daughter who’s run off to join a mysterious religious cult.