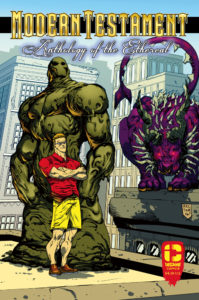 If I thought the first volume of Modern Testament was a pretty great read, then volume 2 is even more so of a great read. Heck, I even learned a new thing too that I hadn’t known about before! Which is proof that you can in fact learn from comics, people. So don’t ever let anybody tell you different! The first story, which is about the Golem and a young man that the being helps, something I haven’t seen be used much in comics (and it needs to be more of a thing) had art in it that I thought was done by the same guy who did the art for ‘Hushers’! But it wasn’t sadly enough! Even with the art looking very similar! And no, that’s not a bad thing as the art (done by Adrian Crasmaru) in ‘Schoolyard Monster’ is pretty great to see. Joseph (the young kid) hasn’t had an easy time of things thanks to a few bullies. One who even thinks of himself as Joseph’s friend. Which, yeah, to Hell with that! As no way does a friend treat another friend like crap. Even refusing to leave Joseph alone when asked to do so.

And its clear this guy is need of a serious ass kicking. Which, he does get, even if it does get a little intense thanks to the Golem! Something that will no doubt cause Joseph problems for the forseeable future unfortunately. Though Frank certainly does leave that up to the reader’s interpretation of things! 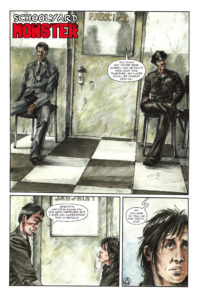 Some serious talking there! 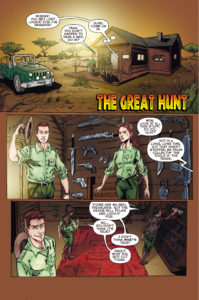 Volume 2 also nicely enough served to teach me about something I never even knew about until recently! And its all thanks to the second story known as ‘The Great Hunt’. Featuring a couple of overly eager hunters out to catch a big ol’ critter with Biblical themes known as the Behemoth. And the version we see of that being in this is certainly nicely brought to life through the imagination of not only Frank Martin, but Igor Chakal as well! There’s also a lesson to be learned in this story that you should always, ALWAYS listen to your elders. As they usually know what the heck their talking about! Stanislau Leonou’s colors for the Behemoth on this simply rocks! And boy does that big fella know how to take a bite out of people! To be honest, I definitely wouldn’t mind seeing more stories featuring this version of the Behemoth. As it would be interesting to see what all happens with him around!

Especially if he happens to help an old crone get herself more goodies from foolish hunters! Now, the final story called ‘What Is He Good For?’ (Absolutely Nothing), which to me is a nice throwback to a certain song I’m sure we’re all familiar with by now at this point! This story nicely enough, features the Horseman of War! And while he’s nowhere near as much of an asshole like his brother from the fist volume, he is still fairly manipulative! Which, you know, makes sense considering what he represents and all! Frank, Noreus Teues, and Laura Ruggeri do a great job with War in this third and final story for Modern Testament volume 2. Especially when he expertly gets what he wants from a poor sap who is probably gonna end up regretting his decision later on. If he’s able to pull off his promise anyway! Heh, so much for a nice peaceful vacation

It’ll be interesting to see what Frank does in a possible third volume for Modern Testament and beyond that. Naturally, I wouldn’t mind seeing a big ass team up with all the characters we’ve seen so far as I think it’d make for one Hell of a read! Especially if there’s some ego happening as well! And one thing that’s easily noticeable is that while volume 1 had a pretty dark feel to it, volume 2 doesn’t really feel as dark in my view. Probably on account of the fact we don’t have a Horseman shoveling food into some poor woman’s mouth! If you haven’t checked out this second volume yet, then I have to ask, what you are waiting for!? Go and do so, like… Right now!

Editor’s Note: Modern Testament Volume 2 can be found right here in either print or digital format!

Summary: How would a bullied youngster unwittingly summon a golem? Is it a good idea for hunters to voluntarily seek out the legendary Behemoth? And what happens when the Horseman of War confronts a veteran on vacation? Modern Testament continues to answer such questions with three all new standalone tales of biblical beings trying to find their place in our modern world.