as it sounded quite promising to me. And now that I’ve finally read it, that promising vibe still holds up in my view. I love that this is all in Kim’s view and that we get to see a running dialogue of her thoughts as we go through this book. Even though it kinda feels like Kim’s missing that Valley Girl like vibe from the show but that’s just me and one tiny little gripe I have about this. Kim’s time with the Rangers has really taught her well and I’m glad to see Brenden and Kelly making great use of that here. The fact she’s won a few gold medals is pretty nice too and it has me wondering she’ll be doing next after the Games and this latest adventure of her’s is over with. An adventure that pretty much begins when she can’t get ahold of her m

om for reasons unknown. And considering how gung ho the woman seems to be about things, its no wonder our fair Pink Mistress is concerned!

Sarah’s colors for this and Daniele’s art are two things I particularly like here. Especially when the new Ranger outfit appears! I’m glad they and Brenden and Kelly are using their imagination to go a little wild in the suit’s design rather then having the same look as her original suit. Which were this on the show happening, woulda been a thing since Saban likes to be cheap and all. I’m curious to see what role Serge may play in this six issue series beyond being a starting point for Kim to track down the missing residents of the town her mom and step dad live in. And who the Sea Creature monsters turn out to actually be makes for some high stakes for certain as it’ll mean Kim will have to be absolutely careful in how she deals with them! Though I imagine she’ll be showing Goldar how she feels about the whole thing once she gets the chance too! I have to wonder though if Goldar actually knows its her in the suit or if he actually thinks it someone else? 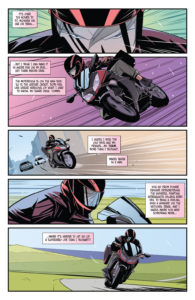 On the road to mom’s!

Though I’m sure once she’s done kicking his butt he’ll know who she is! Gotta say I’m curious about who or what this monster is that ol’ Goldie’s looking to raise, especially if he’s doing it without Rita and Zedd’s involvement. Something I imagine they won’t be too happy about not being involved with once they find out! Well, if they find out anyway! Heh, Kim contacting them and informing the two of what Goldar’s been doing would be amusing to see happen here as it’d mean some real deep doo doo for the flying baddie! I can’t wait to see where Brenden and Kelly take this story and if you are a fan of Kimberly Hart and have yet to check this out, I urge you to do so!

Summary: Expect new problems, new powers, and an all-new costume for OG heroine Kimberly Hart as she returns to the Pink Ranger mantle! But how? Why now? Discover firsthand in this exclusive story that spans the Mighty Morphin universe as never before!