Well now, despite this being basically a 12 page preview, I 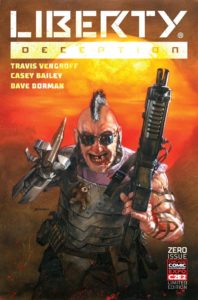 am definitely interested in seeing more of this little world of Travis’. A world of people forgotten by the rest of humanity for whatever reason and left to fend for themselves for years. Which makes me wonder how the rest of humanity will take things once they finally remember these people despite the fact its been a good long while since they came to this world to colonize it and what not. But at least the colonizers have been doing somewhat decent for themselves! Well as decent as they can be anyway when you got police states and anarchists happening with a little cannibalism thrown in for good measure! Which makes me real happy I don’t live on

this planet! And considering the summary for this and what I read within the twelve pages, I have to wonder if the Conways are who Tertulius will be recruiting? And what is it that gets them jailed for him to meet them to begin with?

It certainly seems the Conways are a bit into cannibalism too if the jerky they like to eat is anything to go by! Which is likely to make me think differently of jerky now after reading this! Course the jerky they end up getting is courtesy of the moronic Prox gang for being greedy little jerks. Hopefully ol’ Claw will make use of better judgement in the future so as to avoid that sort of thing! But come on now Liv! Its not his fault for how things went belly up! I will say though that Claw could use some serious work on his teeth! But I guess when things are bad, proper teeth care isn’t exactly ap priority.

I enjoyed this short story with its great art and colors and I would recommend checking this preview out, along with the first volume that was a successful funding on Kickstarter some time ago. So if you need something quick to read that you want to be hooked on by the final page, this will be for you!

Summary: Forgotten by the rest of humanity and encompassed by planet-wide desert, the colony of Atrius endures. Over the centuries resource scarcity led to schisms in the population and now the vast city is split between a police state and the vast but fractured population of anarchists, who live in what is referred to as the Fringe. The Fringe is a place where gangs run everything, where cannibalism is the norm, and it is there that exiled war-hero Tertulius Justus must recruit a rag-tag brigade of untrustworthy prisoners to escape certain death. 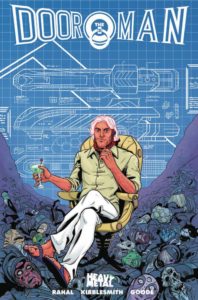 Summary: Henry’s marooned on an alien planet. Detective Flower’s been shot. Charming gazillionaire, Carlisle Moongale, just murdered every other Doorman in the galaxy. Now, Henry must convince corrupt space cops to go after the universe’s richest man – or learn that in space, no one can hear you squeal! Eliot Rahal (The Paybacks, Unity) and Daniel Kibblesmith (Bloodshot, How to Win at Everything) team with artist Kendall Goode (The Pride) to bring funny back!

Last issue Detective Flower met the Doorman for Earth and the two ended up on a grand adventure, depending on your point of view. They were there when Carlisle Moongale, one of the richest men known, killed all the Doormen but one Henry Clay. Now with Detective Flower having been shot in the head things are about to pick up and it seems that Carlisle is in the clear.

I really like this series so far. There’s this whole kitschy thing about it that’s appealing like an episode of Moonlighting that you’ll watch and before you realize it it’s over. At the same time there’s a great premise here that includes a mystery, intrigue and a lot of action not to mention some mayhem. So opening up we meet the galaxy’s version of Brad and Angelina as they fall prey to Carlisle’s machinations. 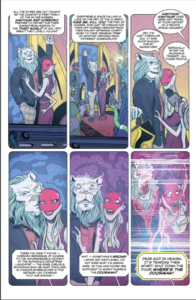 Kendall’s imagination and eye for what will work here is really impressive. I mean they may be aliens but that’s Brangelina! Plus his eye for how the story needs to flow through the panels from page to page is pretty nice to see. I really like his attention to detail and the use of backgrounds and overall his creativity when it comes to creating these characters. Plus the emotions we get here are great you get what the folks are feeling and that’s important.

So while Flower and Henry are getting better acquainted with each other through a few surprising turn of events the story keeps moving along in a way that’s strong and interesting. There’s more going on here than meets the eye and Carlisle has to have a greater network of people in his pocket to be getting away with all this. Plus there has to be more people they can turn to in order to help them too. So I like that we’ve still got more potential here. I mean we’ve seen only a portion of Carlisle’s reach and how he treats those working for him so there has to be more they can recruit to help them. If not then yeah I’m okay with that too because it really is kind of fun to watch these two stumble along getting kind a lucky..

A strong as yet fully revealed story with interesting characters and really fun interior artwork this is the kind of stuff that makes Men In Black look like kids play.

Editor’s Note: Head here and find out how you can grab yourself a copy!