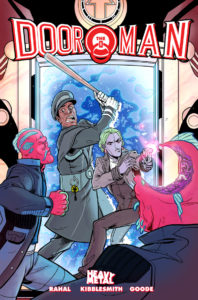 This is a pretty interesting concept and a wonderfully executed first issue. I found this incredibly engaging, interesting and rather fun to read it’s as if Eliot and Daniel took their cue from some high octane movies where the main character is thrust into a situation beyond their ken and have to make it work. Well that and some Stargate action as well. Henry Clay is the Doorman for Earth and we meet him this issue in the most spectacular fashion.

He’s been in his position for 40 years now and it’s retirement time only things aren’t going to go smoothly on his last day. He’s been largely ignored and has little to do other than watch the DOOR that’s really never been used. Until his last day on the job when his life will change forever! The characterization we receive here is fantastic as he’s just an average guy who found himself in a place to get this job.

When someone comes through the DOOR it’s definitely not who Henry was expecting and as it turns out he’s not alone as Detective Flower of the Confederation of Systems Police has come in the knick of time to save his life. Once the two decide on what to do it kind of feels like Remington Steele except Flower isn’t as smooth and confident as she comes across. The way the two play off each throughout the entire issue is well worth the price of admission. A true odd couple with different backgrounds from different species they make exploring the universe they inhabit exciting.

So while Henry finally gets to explore the galaxy only he’s known about, there’s another aspect at play as well. We meet the main villain here who’s thirst for power and control know no bounds. He’s a great bad guy, smooth and debonaire and surprisingly well respected, probably feared as well–think a Donald Trump type. This of course leaves our intrepid duo on an intergalactic adventure of epic proportions as the story plays out and we see what exactly Carlisle Moongale’s plans are. 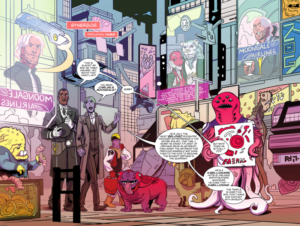 Love the interiors by Kendall. It’s a great opportunity for someone to stretch their imagination and create new and unique aliens species. As well keeping many humanoid in appearance as well as some that come from very different origins. The use of pages and panels to help the flow of the story is nicely done. He also has some great skill in portraying facial expressions and the emotions of characters to really get the reader more involved in the story.

Who knew Heavy Metal Inc. would have some killer instincts to make such a strong and bold statement in the comics industry?

Editor’s Note: Interested in getting your heavy metal on with this title? Then head right here!

Summary: Welcome to the Universe. Every populated planet has a DOOR. Those who operate the DOORS are known as PORTERS– Interplanetary doormen who usher visitors from world to world. No one remembers who built the DOORS or why. The Porters guard the knowledge of how the DOORS are operated, sharing their secrets only with the apprentices who are to replace them. And a Porter never leaves their post.