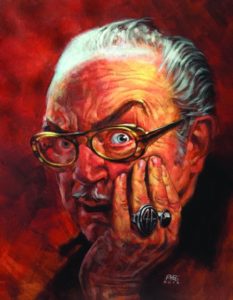 FAMOUS MONSTERS PRESENTS: TALES FROM THE ACKERMANSION is a salute to Forrest J Ackerman, who was instrumental in fostering the careers of so many luminaries, including Ray Bradbury, Ray Harryhausen, Rick Baker, Stephen Spielberg, and many others. Ackerman was also known for enthusiastically encouraging creative pursuits such as conventions and cosplay. 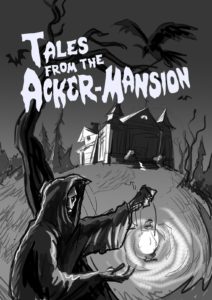 Famous Monsters and AGP will be launching a Kickstarter on June 15 to facilitate this once-in-a-century celebration at the first ever Alien Con™ in Silicon Valley on October 28, 2016. Alien Con, in partnership with HISTORY® and ANCIENT ALIENS™, is a celebration of all things science fact and science fiction in honor of the man who coined the term “Sci-Fi”.

ABOUT FAMOUS MONSTERS
Famous Monsters of Filmland, Famous Monsters of Filmland, founded in 1958, is the only original sci-fi, fantasy, horror, and pop culture fan magazine remaining in circulation today. Famous Monsters influenced an entire generation of monster kids who grew up to become some of Hollywood’s most recognized names: Steven Spielberg, Guillermo del Toro, Peter Jackson, Rick Baker. Today, the magazine enjoys worldwide distribution, and the company has grown to include comic books, designer apparel, an online store, a prominent place at San Diego Comic-Con, a divison for special events, an exclusive chocolate line, licensed guitars, and countless other goodies. To learn more about Famous Monsters, visit famousmonsters.com… or just ask your eccentric neighbor.

ABOUT AMERICAN GOTHIC PRESS
American Gothic Press, established in 2015, is a publishing imprint of Famous Monsters of Filmland magazine consisting of comic books in the Sci-Fi, Fantasy, and Horror genres. Famous Monsters of Filmland is the longest running entertainment fan magazine in the US, having been established in 1958 by Forrest J Ackerman and publisher James Warren. Ackerman also co-created one of the most enduring comic book heroes of all time—the seductive Vampirella. American Gothic Press marks FM’s journey back to the creation of original characters. Following a stunningly successful first year with GUNSUITS, BROKEN MOON, KILLBOX, MONSTER WORLD, and IRWIN ALLEN’S LOST IN SPACE, the imprint plans to keep the spirit of imaginative storytelling alive and well beyond the pages that an entertainment magazine can provide. We hope the monster kids will join us.